Fitz & the Tantrums, the chart-topping, coed septet fronted by vocalist and songwriter Michael Fitzpatrick were the featured performers in a dazzling evening that officially opened this year’s event.

Tennis legends John McEnroe and Martina Navratilova was on hand to mark the 30th anniversary of their 1984 US Open singles titles and also took part in the ceremonies, smacking tennis balls into the upper deck of Arthur Ashe Stadium and triggering the remote lighting of the Empire State Building in midtown Manhattan.

Fitz & the Tantrums played three songs, entertaining the crowd with their signature neo-soul sounds accompanied by a laser light show and projections of classic US Open moments onto the court. The band, which reached No. 1 on the Billboard alternative charts with their hit singles “Out of My League” and “The Walker,”  and whose 2013 sophomore LP, More Than Just a Dream, reached no. 26 on the US pop chart had the Opening Night crowd on its feet, perfectly setting the stage for the opening evening of tennis. 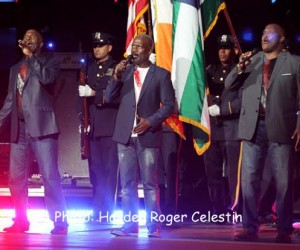