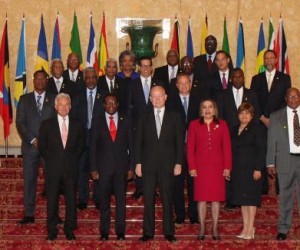 News Americas, LONDON,England, Weds. Aug. 27, 2014: As far as I can determine, few if any of the current group of Caribbean Prime Ministers, or opposition leaders keeps a diary recording events or conversations of importance. Moreover, on demitting office no longer does there appear on their part to be any desire to produce an autobiography or even encourage a biography explaining the detail of their experience in government or in politics.

The same holds true for the private sector.

Unlike their counterparts in other parts of the world, senior Caribbean figures either do not have the time, or they lack the desire to explain to history what drove them, or the reasons why decisions, domestic, regional, or international were taken or avoided.a

It was not always so. Many internationally respected figures in the region’s past, including Michael Manley, Errol Barrow, and Edward Seaga, and some who came before, either wrote about their experience, their philosophy, or to a lesser extent their exchanges with colleagues and regional counterparts; while a small number of others in the region, with or without permission, have published books about regional figures.

Some like the late Tom Adams and a few of the region’s diplomats carefully recorded while in office the events and conversations that changed the region; but almost without exception, these private records have yet to see the light of day.

What this means is that there are relatively few primary sources of modern Caribbean history. This is made worse by the fact that access to high level Caribbean government documents is at best sporadic, idiosyncratic or limited, with much that might have been recorded remaining unknown, withheld or destroyed. The consequence is that many important moments in national or regional history are lost; making it increasingly hard to understand in retrospect what happened or is now happening.

One consequence of this is that it makes for those coming into Caribbean politics, or others who need to understand regional or national dynamics, stuck with political mythology, unable to grasp issues well, or respond in ways that understand Caribbean sensibilities. The result is that today it is far easier to know in great detail about slavery, reflect on the colonial experience, or follow the detail of the process that led to independence, than it is to understand through first-hand accounts the late twentieth century Caribbean history that followed.

Instead, what is apparent is that much of the detail of the Caribbean’s contemporary history has been recorded through the eyes of foreign diplomats, their governments and those who are paid to have an interest in the region. This was most recently demonstrated by Wikileaks when it published online leaked US State Department reporting from Caribbean-based US diplomats, or in the opening to public view last year of key documents relating to the 1983 US invasion of Grenada, contained in the archive of Margaret Thatcher.

That said, there are a small number of journalists, columnists and academics both within the region and beyond who remain committed to trying to explain to a national or wider audience not just what is happening, but more importantly why; and there are also some very good regional investigative journalists mainly focused on the abuse of power, criminality or corrupt practice, who are prepared to take risks in small nations where governments, if they so chose, can be vindictive or worse. There are also sometimes hard to access newspaper archives which gradually to a greater or lesser extent are coming online.

For a region where everyone has something to say about politics, as is evidenced by the many online blogs, scurrilous or otherwise, it is surprising that detailed first hand Caribbean accounts of key moments in regional history remain missing.

Why this should be, is unclear. It may be that no one in the Caribbean’s political class wants to reflect on the detail of past discussions out of a sense of solidarity with their peers, or fear of retribution; it is in part about the absence, for the most part, of high quality journalism in much of the Anglophone Caribbean, able to consider seriously what might be written; and it may also be because there is no longer any money in undertaking such an enterprise. This is because Caribbean book publishers have largely come to focus on academia as new technology is fast making the industry un-viable, the Caribbean market for books is small and fragmented, and there are few bookshops.

That said there is some hope.

Last year, Richard Bernal, the former head of the Caribbean Regional Trade Negotiating Machinery published a largely academic book about the region’s Economic Partnership Agreement (EPA) with Europe. The book, dryly entitled, ‘Globalization, Trade and Economic Development’ is at one and the same time a manual for small states involved in international trade negotiations, a high level primer on the problems that have faced and still face the Caribbean in relation to its economy and international trade negotiations; and a quiet treatise on why negotiations for freer trade matter, and are a path to economic growth.

It is in every respect worth reading.

But what is interesting about the book is that at times it lapses into the first person and makes clear the difficulties Ambassador Bernal labored under. For instance: ‘As principal negotiator for Cariforum’, he writes, ‘I had access at all times to Arthur, Golding and Miller, and the two Prime Ministers were indispensable, particularly during the last scheduled day of negotiations. Their ability to make courageous decisions and consolidate political agreement allowed me to fully exercise my initiative, discretion, and judgment within the mandate given to me’.

While his book is in no way an autobiography, or provides the missing blow by blow account of what really happened in key meetings such as that in Georgetown at the end of the EPA negotiating process, it does help explain a little why the Caribbean is where it is today.

Later this year, in November, the Caribbean’s elder statesman, Sir Shridath Ramphal, will publish an autobiography: ‘Glimpses of a Global Life’. The book is expected in part to reflect on the 15 years that he served as Commonwealth Secretary-General, during which time momentous events took place, including white Rhodesia’s unilateral declaration of independence, the struggle against apartheid and, in a Caribbean context, the US invasion of Grenada.

It will be an important event, not just because it will chart Sir Shridath’s often difficult relationship with Britain’s then Prime Minister, Margaret Thatcher, but because it will shine a Caribbean light on aspects of contemporary world and regional history.