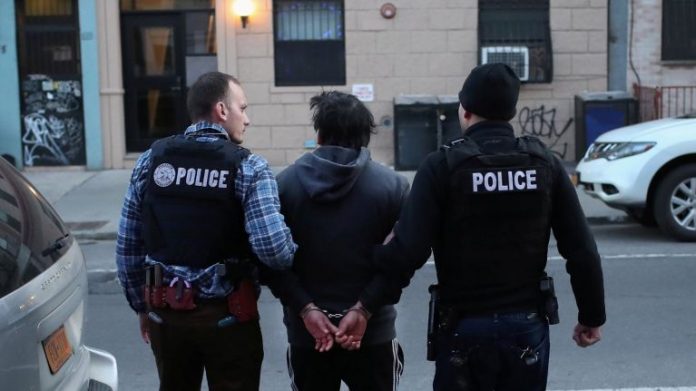 The Haitian national was arrested in East Elmhurst, Queens, NY and had been sentenced to 4-12 years after being convicted, not just for second degree manslaughter, but also for tampering with physical evidence and criminal possession of a weapon.

The 39-year-old Jamaican national and registered sexual offender was arrested in Brooklyn and has been convicted of attempted rape of a child under 13 and criminal possession of a loaded weapon.

Also nabbed by ICE agents were a 57-year-old Jamaican national who has convictions of sexual abuse of a child under age 14; and two Dominican Republic nationals, who were arrested in Manhattan and the Bronx, respectively.

In the Bronx, a 33-year-old Dominican national, who was sentenced to 6 years in prison and 5 years of parole supervision after being convicted for criminal possession of a loaded weapon, robbery and forcible theft, was also detained.

Several had prior felony convictions for serious or violent offenses, such as child sex crimes, weapons charges, and assault, or had past convictions for significant or multiple misdemeanors.

Some of the individuals arrested during this operation will face federal criminal prosecutions for illegal entry and illegal re-entry after deportation.

The remaining immigrants are in ICE custody awaiting a hearing before an immigration judge or pending travel arrangements for removal in the near future.

There Are Now Over 400 Coronavirus Cases In The Caribbean

Standby for the outcome of this session – Travel Weekly