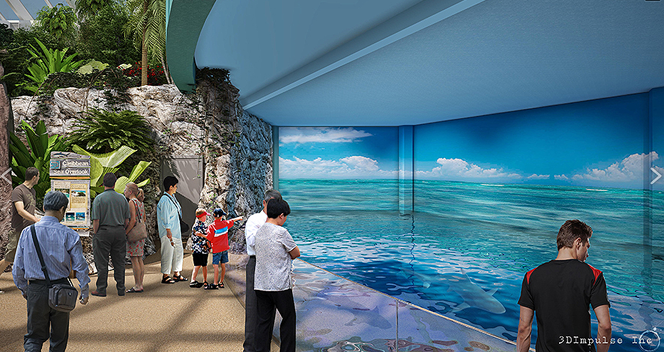 News Americas, CORPUS CHRISTI, Texas, Fri. April 7, 2017: The state of Texas is hoping the incorporation of a piece of the Caribbean into one of its tourist attractions will bring more visitors.

The Texas State Aquarium is opening ‘Caribbean Journey’ on Saturday, May 13th in Corpus Christi, Texas.

The ‘Caribbean Journey’ will be over 71,000 square feet of exhibit space, more than double the total size of the Aquarium. It will include exhibitions featuring the jungles, seas, coral reefs and coastal lagoons as well as flamingos, crocodiles, birds including Macaws, Jamaican fruit bats and Vampire bats, a sloth, and other species from the Western part of the Caribbean region.

Caribbean Journey’s bottom floor will provide an immersive view into the Coral and Blue Hole exhibits, which will house sharks, stingrays, and hundreds of colorful coral reef fish. A highlight attraction will be the 400,000-gallon H-E-B Caribbean Sea Shark exhibit, where reef sharks swim among a replica life-size shipwreck.

Visitors will be able to view this underwater landscape from a 68-foot long display window — the longest in North America — and by traveling into an acrylic tunnel that crosses through the exhibit.

The grand opening of the $58 million building comes after 30 months of construction and could become one of the nation’s premier aquariums and a $69 million economic boost to the state.

“With Caribbean Journey nearing completion, the Aquarium is in position to become a global leader in fostering support for the conservation of the Gulf of Mexico and the Caribbean Sea,” officials said.

When Does a Cycling Boom Go Wrong? When Everyone Rides on the Sidewalk –...