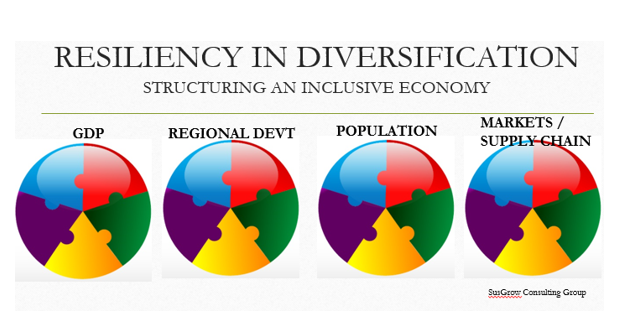 For sustainable long-term growth, however, just as important is determining current weaknesses and restructuring a more resilient society than before.

The novel COVID-19 virus has created pretty much a global socio-economic paralysis.  Borders closing, international flights down to a trickle, cruise tours suspended indefinitely, major sports events, hotels, restaurants, clubs and bars are frozen, all except for the sale of basic food and medication.  This economic and social collapse is now expected to last several more months until the rate of contagion has peaked and recovery begins.

Most, if not all countries in the Americas experiencing this crisis have pretty much brought their economic systems to a halt and are settling their citizens into a never-before restricted indoor minimal survival lifestyle.  Accepting the reality of coming months, we are left with outlasting this social and economic downturn with high spirits, hopes and expectations that recovery will be gradual with an eventual normality in the distant future.

A critical question becomes – do we simply want to get back to the way things were six months ago before this crisis or is this a good time to search for a much brighter future?

Crisis response tends to address the immediate needs for personal, government and organizational survival.  In parallel, on another level effective crisis management should analyze profoundly how to adapt the economic system with a goal of making it even more resilient to future incidents.

In one of the most stable economies in the Americas, frequently recognized for its economic success over the recent decades, more than 20% of its population still lives below or at poverty levels (with some form of government assistance) and the following 30% or so survives off the grid, that is not on a payroll.

Positively one can say less than one half the population is credited with most if not all the country´s GDP.  In another country the extreme case might be the three richest citizens control 10% of the GDP.  In several others, the service sector dominates the GDP with over 60%.  Examples of imbalance are plentiful.

These scenarios have been developing for decades, yet the COVID-19 crisis may have created what can be considered an ideal opportunity for leaders to step back, analyze and plan how best to restructure unsustainable economic systems.

Critical sustainable economic development factors to be analyzed may include:

Instead of simply riding out the COVID-19 crisis waiting for the return of normality, leaders of the Americas should take advantage of this down-time to analyze, restructure and begin to rebuild a much more inclusive and sustainable economic system with the resiliency to withstand many more crises.

Maybe one silver lining in the COVID-19 crisis is that it clearly exposed the need for creativity and foresight in executing strategic plans for adaptable economic systems to sustain long-term growth.

Recently when asked who is to blame one economist said, “In a democratic society we the people are to blame for placing too much expectation on our leaders.”

Within the stormy clouds of every crisis there are always rays of lights illuminating the road to a better future.

Asthma Rates Among Latino Children Above National Average, Double in Some … – Latin...