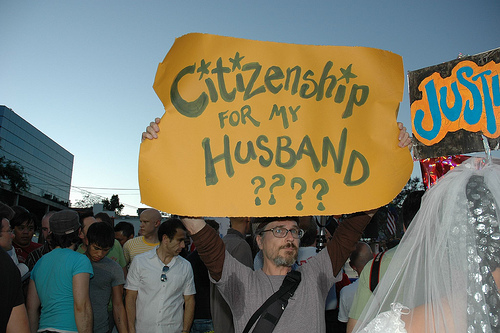 News Americas, NEW YORK, NY, Fri. July 3, 2015: The historic Supreme Court ruling on Friday, June 26th in the case of Jim Obergefell that gives same-sex couples the right to marry in any U.S. state and have the same rights as heterosexuals, now puts the spotlight again on the immigration rights of same sex couples.

Interestingly, the issue has been dealt with since the 2013 Supreme Court decision known as Windsor. Windsor overturned portions of the federal Defense of Marriage Act (DOMA) that defined marriage simply as the legal union of a man and a woman.

That ruling effectively required federal agencies to recognize same-sex marriages. Shortly after the ruling, President Obama directed all federal departments and agencies, including the U.S. Citizenship and Immigration Services (USCIS), to implement the ruling swiftly and smoothly.

This paved the way for the US Citizenship & Immigration to start accepting and processing same-sex applications for spouse-based visas, fiancé visas, or derivative status on a spouse’s citizenship status as they would for an opposite-sex marriage.

It means that any U.S. citizen or LPR who is validly married to a foreign national can sponsor his or her spouse for a family-based visa, regardless of the gender of each partner.

With the June 26th decision, the only limitations from the federal legal immigration hurdles facing gay, transgender, bi-sexual and lesbians will apply to those who are undocumented. The ruling will only help if the undocumented LGBT person gets married to a U.S. citizen and adjusts their status.

Under the 2013 rules, a U.S. citizen or lawful permanent resident in a same-sex marriage to a foreign national could sponsor their spouse for a family-based immigrant visa based on the same rules that applies to a heterosexual couple.

Meaning, to get a green card based on a sex-same marriage, you must be legally married, either in the U.S. or abroad and be able to demonstrate that the legal marriage is based on a genuine, bona fide relationship.

According to the U.S. Citizenship & Immigration Services, the U.S. citizen spouse must file Form I-130. The eligibility to petition for their spouse, and their spouse’s admissibility as an immigrant at the immigration visa application or adjustment of status stage, will be determined according to applicable immigration law and will not be denied as a result of the same-sex nature of the marriage.

If you are a gay or lesbian U.S. citizen and are engaged to be married to someone of the same gender, then you are eligible to file a fiance petition. As long as all other immigration requirements are met, a same-sex engagement may allow your fiancé to enter the United States for marriage.

The holder of a K-1 fiancé petition may enter the U.S. for the purposes of getting married within 90 days of entering. On the basis of the marriage, the foreign national may then file for a green card through a process called adjustment of status.

An I-601 or I-601A immigration waiver may be necessary for gay and lesbian foreign nationals with certain problems such as criminal convictions, fraud, and unlawful presence. These waivers require a demonstration of extreme hardship to a qualifying U.S. citizen or permanent resident relative.

Same sex married couples can also benefit from Green Card Lottery wins where the permanent residency also applies to their same-sex married partners. Same-sex spouses of Treaty Trader (E-1) or Treaty Investor (E-2) visas may apply for an E visa derivative status, which also allows for work permits; H-4 visas are available for gay and lesbian individuals who wish to accompany their spouses on H-1B temporary work visas; and L-2 are available for gay and lesbian spouses of L-1 visa holders.

For more information see the USCIS website or directly at https://www.uscis.gov/family/same-sex-marriages