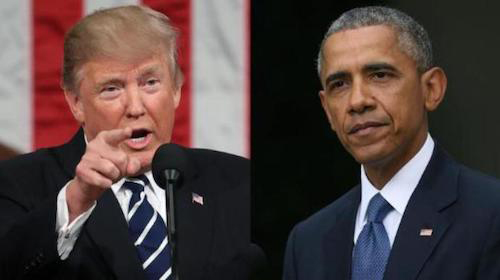 How completely different Trump is and Obama was as President? The only thing they have in common is how much golf they both play! Both Covid-19 and Black Lives Matter prove otherwise.

In many episodes of Trump’s America, I hardly mention him at all. That contrast looms large in my finding them too much alike. In Trump’s case, I find much less to focus on since his bombast and tweets aside, Trump is the kind of President any of us should have expected of a Republican.

Many too easily confuse style with substance. If any other Republican had been elected President in 2016 and had the same policies and record as Trump, no one would be surprised by him or her today. In fact, it is likewise beyond dispute that Trump would never have been impeached by Democrats based on smoke and mirrors, except for his bombastic style tweets and all.

Trump is President of the Status Quo, where wealth and power rule.

In Obama’s case, so much about him was not what so many of us wanted and expected. President Obama failed to meet progressive expectations over and over and over. What changed about America with Obama as President? Obama ran on a platform of CHANGE in 2008 but all we got was the same ole.

Obama was President of the Status Quo – where wealth and power rule.

All that truly separates the two of them is the slightly different Republican Party and Democratic Party versions of the STATUS QUO! Big Deal!

And although this episode is not precisely about Joe Biden, at the same time it very much is, in that the ONLY reason another Status Quo junkie and Obama’s partner for 8 years is on the cusp of possibly being elected President, is based on one reality – Biden is NOT Donald Trump. When in fact he is …

Another candidate of the Status Quo where wealth and Power rule. All those Republicans, especially the pundits selling FEAR of Biden because he will have a RADICAL agenda, give us a break. Status Quo Joe? Really?

But ENOUGH about Biden! Again he is not the subject of Special Episode 175.

What I am going to do here, as you would expect from me to be novel, is back into my hard drive and choose by chance some episodes of Obama’s America from the 6 long years I did it to …

PROVE and remind you what a Status Quo President Barack Obama was.

Unbelievably by chance I went to Obama’s America Episode 69, first which was published June 11, 2012, exactly 8 years ago this week: Titled “OBAMA GOES UP ON SMOKE AGAIN.” This is the opening …

“It appears Barack Obama has no qualms about the most damaging and addictive foul substance known as tobacco remaining a closet smoker even in The White House.”

“Welcome to another episode of The Hypocrite President. So many subjects so little time unless I start writing more than one Commentary a week …. This Commentary is particularly damaging but then they all are.”

“Former Big Time Hawaii Pot Head Barack Obama is not only adamantly opposed to any and all use of marijuana as president of the United States, he has become the Grand Inquisitor sending Federal forces a ross the land to bust legal marijuana growers and sellers with particular fervor and intimidation in states that have approved medical use of marijuana.”

Sorry that is all of # 69 I can fit here. But as I note and as was the case for all 8 years of Obama’s Presidency, he kept marijuana as a Class 1 narcotic, along with only heroin. Not even cocaine was included, which resulted in harsh jail sentences for mostly African Americans for no good reason at all.

Now here is another random episode …

OBAMACARE FOR THE MEDICAL INDUSTRY … some of the opening:

Yes, indeed for the 8 years of the Obama Presidency, the medical and drug industries had a very good time. The rest of us did not at OUR expense!

Maybe just one more although I could go on and on. Here is one from near the end of Obama’s Presidency, October 16, 2016, just weeks before Obama’s chosen candidate Hillary would easily be elected President!!!

This episode is titled PRESIDENT OBAMA UNMASKS HIMSELF.

Here are a few excerpts beginning with the opening … “It’s still early for Halloween but President Obama forced my hand. By unmasking himself in The Economist Thursday. The mask he has kept on continuously for 8 years. He may still think he is wearing it I know better here in Obama’s America”

“Status Quo Junkie Barack Obama the man without a plan to change America for the better .. he had a plan to make sure he gets RICH beyond imagination after being President even richer than the Clintons the GOLD standard.”

“Obama will never stop peddling the line he saved us all from disaster ( after the 2008 sub-prime mortgage fiasco ) when what he did as President was save all the rich greedy criminal punks from going to jail and instead President Obama made them all even richer than before they crashed the economy.”

“All alone in the moonlight I can smile happy your days … I can dream of the old days …. Life was beautiful then I remember the time I knew what happiness was ….. Let the memory live again … and again and again.”

I wish I could do all 313 episodes of Obama’s America for you but these 3 episodes are very reminiscent of all of them and it seems so long ago!

So here is the point Dear Readers of this very special 175th anniversary episode of Trump’s America. I did just for all of you and free …

OBAMA TRUMP OR NEXT JOE BIDEN. It is ALL the same .. it’s all about the Status Quo in America where wealth and power RULE our lives.

WAKE UP AMERICA right now … it is time to do much better for ourselves.

Covid-19 is the terrible messenger that can make us FREE right now. It is up to us – you and me – and all of us. NO more Trump; NO more Biden.

It can happen if we MAKE IT HAPPEN!! Happy 175th episode!

Latin America And The Caribbean Must Rethink Its Future, And The Time Is Now

Can Bowie turn acclaim and hype into record sales?