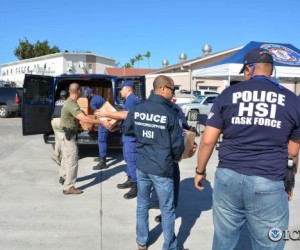 The bust resulted in the seizure of 989 kilograms of cocaine and the arrest of 13 individuals for drug trafficking following an at-sea interdiction approximately eight nautical miles off the coast of Manati.

The initial arrests involved two suspected smugglers identified as Hector Alexander Sanchez-Acosta and Guillermo Boada-Gonzalez, of Venezuela, on board a delivery vessel after it was launched from the Atlantic VII, a 268-foot St. Vincent and Grenadines-flag coastal freighter. On Feb. 4, they were charged in a criminal complaint authorized by U.S. Magistrate Camille Velez-Rive with conspiracy to import 989 kilograms (2,176 pounds) of cocaine.

A Coast Guard boarding team then detained the crew of the mother ship, composed of 11 individuals from Panama, Cuba, Ecuador, Dominican Republic and Peru. The crew was charged with conspiracy to import a controlled substance into the United States Feb. 6. The 13 individuals continue detained at the Guaynabo Metropolitan Detention Center awaiting the outcome of the case.

And while on a routine patrol Feb. 3, a U.S. Customs and Border Protection (CBP) maritime patrol aircraft detected the Atlantic VII acting as a mother ship by hovering outside U.S. territorial waters then launching a small delivery vessel loaded with suspicious packages. Once launched, the delivery vessel headed southbound towards the northern coast of Puerto Rico. A Coast Guard special purpose craft and a CPB marine unit interdicted the smuggler’s delivery vessel, detained two Venezuelans and seized 33 bales which tested positive for cocaine.

Meanwhile, the Coast Guard Cutter Valiant interdicted and boarded the Atlantic VII approximately 11 nautical miles from Puerto Rico as it attempted to flee the area.

The cocaine shipment, the detained smugglers, the delivery vessel and the Atlantic VII were transported to Puerto Rico and transferred to HSI for further investigation.

If convicted, all those arrested could face a sentence from 10 years up to life in prison.