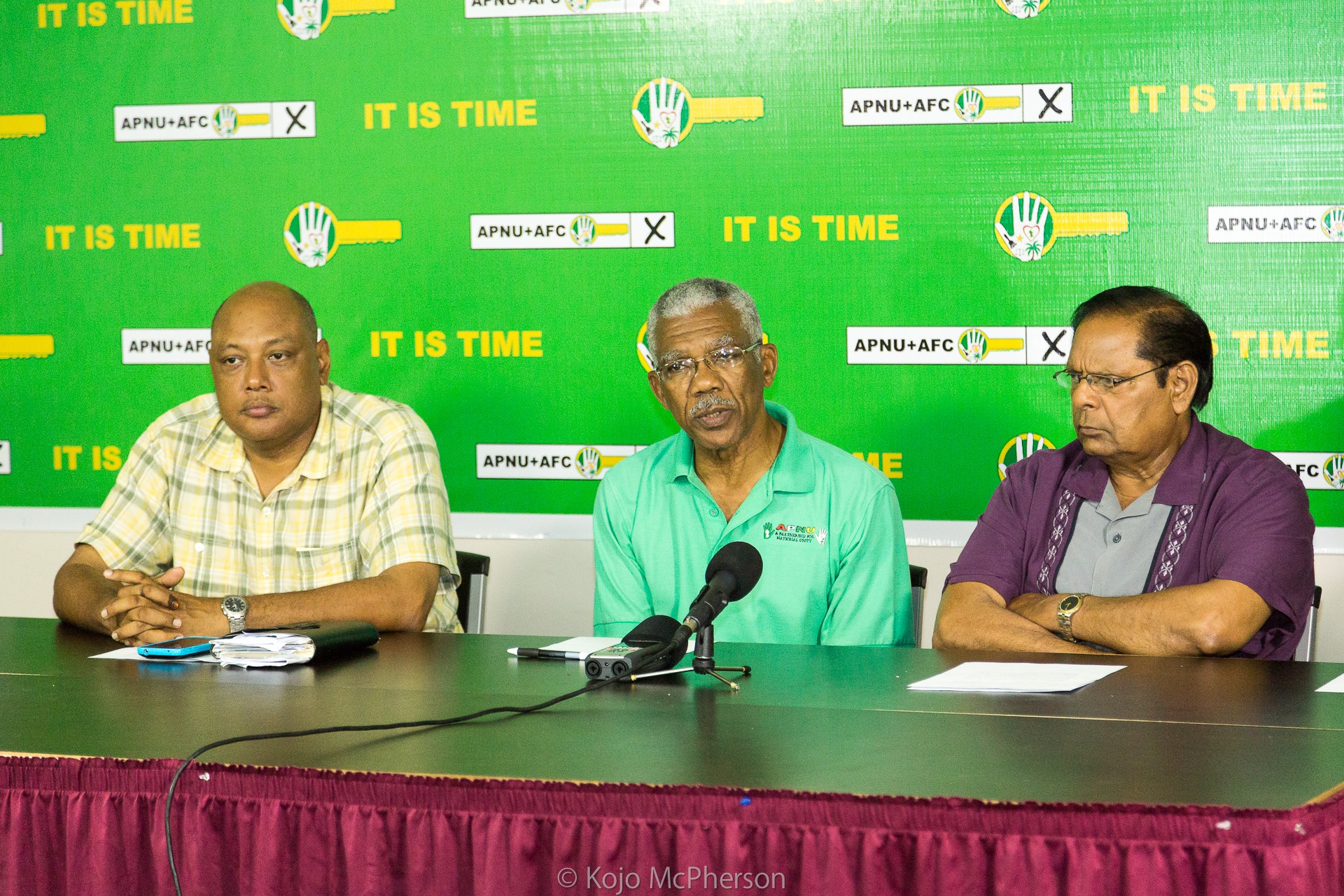 News Americas, GEORGETOWN, Guyana, Tues. May 12, 2015: Some 24-hours after voting in the South American nation of Guyana, voters are still awaiting results from the historic election held on May 11, 2015 as a fire erupted in one area of the country’s capital, Georgetown.

For the first time in decades, Guyanese voters were given the option of choosing a government of national unity and to move beyond the ethnic political divide that has long marred the nation’s voting history.

About half a million voters turned out yesterday to cast their votes across the country, choosing largely between replacing the current Peoples Progressive Party/Civic government with the coalition A Partnership For National Unity (APNU)-Alliance for Change (AFC.)

But as many around the country and the Diaspora last night awaited results of yesterday’s polling, Chairman of the Guyana Elections Commission (GECOM), Dr. Steve Surujbally said at 11 p.m. Monday night they were forced to postpone the release of preliminary results of the 2015 General and Regional Elections owing to disturbances in and around Georgetown.

“Allow me to make an appeal to the citizenry, to the political parties that are contesting these elections that peace and tranquility must prevail. This peace and tranquility cannot prevail within an environment of turbulence,” Dr Surujbally was quoted by the Stabroek News as telling reporters last evening during a press conference at the commission’s Kingston command centre.

He then requested that persons milling around polling stations disperse and go home and revealed that he had “demanded it almost” for leaders of the two major political parties to explain to their loyalists that the ballot boxes are of a lesser import than the statements of polls.

His comments came as Demerara Waves reported several Sophia ‘C’ Field residents rampaged through the streets throwing homemade “bombs” at homes, and nearby cars as they demanded justice and “ballot boxes.”

The residents attacked the house of Pastor Narine Khublall and burned his vehicle following a rumor that he conducted an illegal polling station at his residence, Demerara Waves reported.

The Guyana Fire Service and police were summoned but they were forced to retreat as they were subjected to the rage of the residents. It was only after several members of the Guyana Defence Force (GDF) arrived on the scene that the crowd diffused.

APNU+AFC executives at a 1:30 a.m.  press conference also appealed for calm and “asked concerned members of the public to cooperate in ensuring that the process is smoothly conducted in the best interest of the early declaration of the much awaited results of the elections.”

The People’s Progressive Party(PPP) for its part expressed alarm over what it said was “the threat of social unrest to disturb the peace and good order in our country.”

“These ominous signs of discord and of potential unrest emanating from the opposition camp was sown during the just concluded elections campaign,” the party said via social media last night.

The release of preliminary results is now expected today, May 12th.

However, Rickford Burke, host of the “Caribbean American Forum,” and Caribbean-born political strategist and President of Paramount Communications, Dr. Isaac Newton, last night predicted a landslide win for the APNU-AFC coalition on the live television program on hottcaribbean.com Radio and tcnhd.com.

Both major parties are claiming they will be victorious. Yesterday, after voting, President Donald Ramotar insisted he will win a majority of the votes while supporters of the APNU-AFC believe they will be given the mandate to lead the country forward.

Region one was locked in a dead heat while the PPP/Civic was also leading in Regions 2 and 3. No preliminary results are in for Region 8.