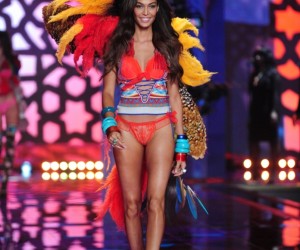 News Americas, LONDON, England, Weds. Dec. 10, 2014: Since the exit of Selena Banks of the Cayman Islands from the catwalks of the Victoria Secret Fashion show, the Caribbean representation in the show has been nonexistent.

But last night, walking the show’s catwalk from London were two models with roots to the Caribbean.

Joan Smalls Rodriguez, the Puerto Rican fashion model who in 2013 was ranked at #8 on Forbes magazine’s “World’s Highest-Paid Models” list was among those rocking the show.

Her father, Eric Smalls, is an accountant and is of African ancestry and her mother, Betzaida Rodriguez, is a social worker who is Puerto Rican and of Spanish, Taino Indian, and South Asian (Indian) heritage.

Jasmine Tookes, 23, was born and raised in Huntington Beach, California and is a stunning blend of West Indian, Brazilian and African ancestry.

Tookes’ grandmother was actually born in Barbados in the Caribbean. She did gymnastics for ten years and was also active in volleyball and softball before she became a model at about the age of 15. Her mother is a celebrity fashion stylist and Tookes was discovered at one of her mother’s showroom appointments. Before breaking out on the international scene, she booked a Spring 2011 DKNY campaign and a layout in Vogue Italia.

A beginner’s guide to the history and hybridity of reggaeton