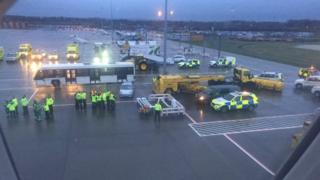 The US government is warning nationals to exercise increased caution if travelling to Trinidad and Tobago due to crime and terrorism.

Passengers and crew on a Virgin Atlantic flight from Barbados were put into quarantine upon arrival in London due to widespread sickness on board.

Princess Cruises’ Regal Princess rescued two people stranded off the coast of Grand Turk after their plane crashed in the sea on Wednesday.

Guyana President David Granger maintained that he could not call an election date unless the Guyana Elections Commission is ready.

Puerto Ricans left jobless by hurricanes have 3 weeks to apply for new aid.

Another federal judge has ruled against the Trump administration, blocking it from adding a question on citizenship to the 2020 U.S. Census.

Guyanese-born economist Kerwin Charles has been named the new Dean of the Yale School of Management.

Venezuela has arrested American journalist Cody Weddle and expelled the German ambassador as conflicts heat up.

And Obed McCoy has been called up for the second and third Twenty20 International matches against England in St. Kitts this weekend.

Venezuela and Nicaragua offer asylum to Edward Snowden – The Guardian