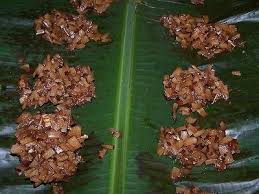 News Americas, NEW YORK, NY, Fri. Mar. 10, 2017: As a child growing up on Jamaica, one of the many pleasures I enjoyed often from my mother’s kitchen was homemade candies. Homemade candies were a special treat for us as children. These candies were made using coconut, peanut and tamarind.

Coconut candies or ‘Drops’ were my favorite. While it was a chore to prepare the coconut, cutting it up in tiny pieces or grating it , the thought of the end product was a great incentive to get the job done.

The candies that were made from the coconut and were eaten as soon as they were cool enough. Leftovers were hidden so no one could steal them, as they were so delicious that having only one or two was never enough.

Today I will share with you the recipe for Coconut Candies or Drops as they were so affectionately called.

Directions
Wash the coconut and put in a heavy Dutch pot.
Add sugar, ginger, salt and water.
Put to Boil.
Boil mixture until liquid becomes a thick sticky syrupy mixture.
Lower the flame under the Dutch pot. Do not let mixture stick to the bottom of the pot.
Prepare banana leaves by washing and allowing to drain.
Pass leaves over low heat to allow the leaves to quail. (This brings the natural oil in the leaves to the surface and prevents the drops from sticking to it.)
Remove the mixture from the flame and using a large cooking spoon quickly and safely scoop the caramelized coconut  mixture on the  banana leaves.
Allow to cool to room temperature and serve.
Makes twelve (12) large drops.

FREMONT CALENDAR for the week of July 5, 2013 – Fremont Bulletin