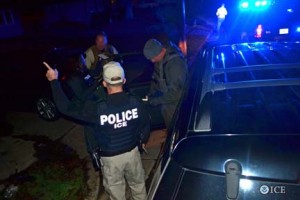 With executive orders issued last month, and the new ban on Monday, March 6, 2017, Donald Trump has given ICE agents a new reckless power to not just round up and deport but denying entry for visitors with valid visas while even questioning the religion of US citizens.

And it is not just “bad hombres” that the ICE agents are going after.  Never mind what Trump said during his Feb. 28, 2017 address to the Joint Sessions.

On that Tuesday night he said: “As we speak, we are removing gang members, drug dealers and criminals that threaten our communities and prey on our citizens. Bad ones are going out as I speak tonight and as I have promised.”

On Wednesday, March 1st, US ICE agents, targeted and arrested 22-year-old DREAMer, Argentina-born Daniela Vargas after she spoke of her status and her fear at a press conference in Jackson, Mississippi. The reason for her arrest: she was no ‘bad hombre’ but was a visa overstay,’ meaning she came in on a visitor’s visa at some point and simply stayed on. Now her attorneys are in the race against time to fight her deportation.

And there are other instances of ICE agents simply profiling and targeting innocent immigrants and not just criminals. In Virginia recently, ICE agents waited outside a church shelter where undocumented immigrants had gone to stay warm so they could nab them. In Texas and in Colorado, agents went into courthouses, looking for foreigners who had arrived for hearings on other matters.

At Kennedy International Airport in New York, passengers arriving after a five-hour flight from San Francisco were asked to show their identification documents before they were allowed to get off the plane.

And then there is what is happening to international visitors arriving at many US airports. On Feb. 26th, Celestine Omin, a software engineer visiting the US on a valid visa from Nigeria, had his claim that he was an engineer doubted by a customs agent at JFK. He was taken aside and detained in a room for hours and then tested by being asked to “write a function to check if a Binary Search Tree is balanced” and was also asked about “an abstract class” and why an engineer might “need it.”

Also in Feb., Australian children’s book author Mem Fox was detained by US border agents at Los Angeles airport en route to a conference in Milwaukee. Fox said she was questioned over her visa, despite having travelled to America 116 times before without incident.

Muhammad Ali Jr., the son of legendary boxer Muhammad Ali, an American born citizen, was detained by immigration officials at Ft. Lauderdale-Hollywood International Airport and repeatedly asked about his religion.

And earlier this month, a Jamaican national was denied entry into the US at the William P Hobby Airport in Houston, Texas, even though she had a valid visitor’s visa. Veronica Gaubault was sent back to Jamaica after agents inspected her iPhone, iPad and other belongings.

These and more incidents are undoubtedly happening daily at US airports and in ramped up targeted raids nationally but are unreported as ICE agents have unbridled power to terrorize us all.

Donald Trump Has Turned America’s Democracy Into A S….Hole

What About Your Caribbean Heritage VP-Elect Kamala Harris?

Is Porsche Carrera GT, Car Paul Walker Died In, The Most Dangerous? Even …...