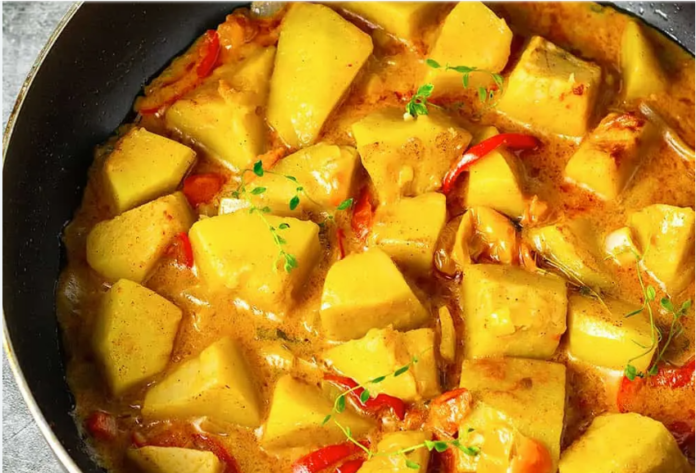 News Americas, NEW YORK, NY, Fri. July 10, 2020: Given its history of slavery, several Caribbean recipes actually date straight back to this horrific era in the region’s history. One fruit that was brought to the region and then became adopted by slaves, is the breadfruit, which today is served in many forms. Here’s a simple vegan recipe for a breadfruit rundown from Michelle of Healthier Steps.

1 large breadfruit – available in Asian and Caribbean markets in the US, Canada and the UK.

Wash green breadfruit, cut in half vertically going through the stem.

Cut out the core of the breadfruit and discard, peel the skin and cut the white flesh into chunks.

Place breadfruit chunks into a large pot, add cold water and bring to a boil on medium-high heat.

reduce heat to simmer for 15-20 minutes or until breadfruit is fork tender.

While breadfruit chunks are boiling, prepare the seasonings, heat oil on medium heat.

Add onion and cook until soft, about 3 minutes.

Bring to a boil, reduce to simmer and cook until sauce thickens, about 7-10 minutes.

This Caribbean American Artist Flavors Thanksgiving With Her Roots

This Latin American Lake Has Turned Into A Desert