News Americas, NEW YORK, NY, Thurs. Nov. 15, 2018: Many in the Guyanese Diaspora in the US last night took to Facebook to send well wishes and prayers to Guyana President David Granger as news broke that the head of state has been diagnosed with cancer.

“I will like to wish a speedy recovery my prayers is with you and your family at this time of your illness,” Kishan Tapsie posted.

Sage Misra added: “Wishing the President a speedy recovery; hope that he gets well and continues with his mandate for the rest of the term” while Ann Narine stated: “My thoughts and prayers are with the President and his family at this terrible time.”

Ian Hall also sent “prayers and well-wishes” as did June Matthews and Roxanne Stewart, who prayed for a complete recovery of the CARICOM head of state.

Their comments came as the Ambassador of Guyana to the Republic of Cuba, Halim Majeed, revealed in a statement Wednesday that the President was diagnosed as suffering from Non-Hodgkin Lymphoma.

Non-Hodgkin lymphoma, according to the American Cancer Society, is also known as non-Hodgkin’s lymphoma, NHL, or sometimes just lymphoma and is a cancer that starts in white blood cells called lymphocytes, which are part of the body’s immune system.

NHL usually starts in lymph nodes or other lymph tissue, but it can sometimes affect the skin.

President Granger arrived in Cuba on Oct. 30th after complaining of feeling unwell in recent weeks. He was subsequently diagnosed with the disease following a series of medical tests and placed in the Centro de Investigaciones Medico Quirurgicas (CIMEQ) on Thursday, November 1, where he underwent a surgical procedure.

On Tuesday, November 6, he was discharged from CIMEQ and returned to his official accommodation.

The second phase of treatment began yesterday, Wednesday, November 14th, and he is likely to be placed in CIMEQ for a short period of two to three days.

The embassy statement added that the President is expected to make a full recovery under the supervision of his doctors. 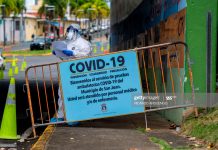 There Are Now Almost 10,000 COVID-19 Cases In Latin America And The Caribbean

There can be no native speaker of English: Linguist – Times of India

The Origin Story Behind New EU Sanctions Against Venezuela