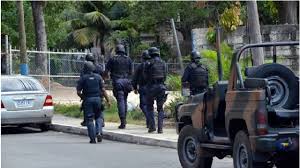 The news comes as the government implemented a State of Emergency in the western parish of St. James in Montego Bay, on Jan. 18th as a result of a significant increase in violent crime. Military forces have been deployed to the area in an attempt to stabilize the situation.

The main opposition in Jamaica, the People’s National Party, (PNP), says it supports the government’s decision.

In a release last week, the party’s spokesman on National Security, Fitz Jackson, said the parish –  home to the tourist capital of Montego Bay, had “reached a near state of anarchy which could not be allowed to persist.”

He said Jamaicans have been calling for a response from government throughout last year, when 1,617 Jamaicans were murdered and already more than 63 persons have been killed since the start of this year.

The opposition party says it lends qualified support to this effort and will await the regulations governing the operations of the State of Emergency which are required to be placed before the Parliament.

The U.S. Blockade Of Cuba Hurts Medical Patients In Both Countries