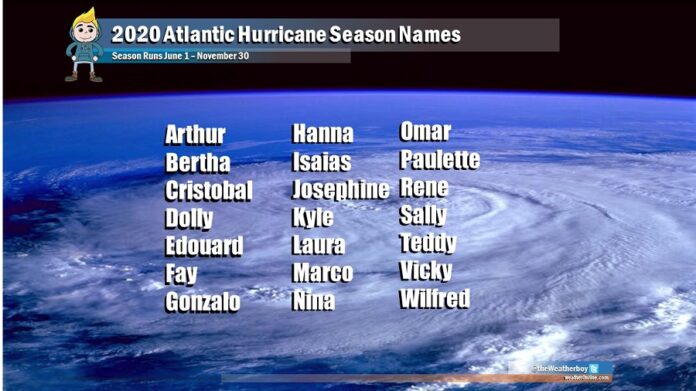 News Americas, NEW YORK, NY, Fri. Aug. 7, 2020:  The National Weather Service on Thursday issued updated outlook calling for 19-25 named storms this year, including 7-11 will become hurricanes. Care to guess what the next hurricane will be named?

With nine storms already concluded so far this season, the list of names released by NOAA this year is almost halfway through. But when the 10th forms, it will be named Josephine.

The name in Hebrew is the feminine form of the name Joseph, which is taken from the Hebrew name Yosef, meaning “(YHWH) shall grow.” In France, the name Josephine means ‘God Will Increase.”

The other names released by NOAA this year that we hope not to get to are:

NOAA’s National Hurricane Center does not control the naming of tropical storms. Instead, there is a strict procedure established by the World Meteorological Organization. For Atlantic hurricanes, there is a list of male and female names which are used on a six-year rotation.

The only time that there is a change is if a storm is so deadly or costly that the future use of its name on a different storm would be inappropriate. In the event that more than twenty-one named tropical cyclones occur in a season, any additional storms will take names from the Greek alphabet.

Given the NOAA prediction and Gerry Bell’s statement that the agency expects “…more, stronger, and longer-lived storms than average,” its best to start making hurricane preparations.

Before Most Positive Thinking Gurus, There Was This Caribbean Immigrant

Maritime community recognised on Day of the Seafarer | Loop...