The two will perform at the wedding service at St. George’s Chapel and Kensington Palace says both Prince Harry and Ms. Markle took a great deal of interest and care in choosing the music for their service.

The Caribbean roots musicians who will have the honor of performing are:

Sheku Kanneh-Mason’s roots extend to Antigua & Barbuda through his father, Stuart Mason. The 19-year-old cellist came to fame in Britian after he won the BBC Young Musician 2016 title and made his BBC Proms debut the following year. He released his debut album, ‘Inspiration,’ earlier this year.

Kanneh-Mason is a student at the Royal Academy of Music and combines his studies there with a busy international concert career. He is passionate about making classical music accessible to all and is Junior Ambassador for the music education charity London Music Masters. Last June, Prince Harry saw him play at an event in London in support of the work of Antiguan charity the Halo Foundation.

The entire UK-based Kanneh-Mason family of 7 siblings is musical and also appeared on Britain’s Got Talent and were deemed ‘The Most Talented Family in the World’ by well-known judge, Simon Cowell. Both parents are classical musicians and their Sierra Leonean mother, Kadiatu, as their first music teacher.

“I’m so excited and honored to perform at Prince Harry and Ms. Meghan Markle’s wedding,” Kensington Palace quoted him as saying. “I was bowled over when Ms. Markle called me to ask if I would play during the ceremony, and of course I immediately said yes! What a privilege to be able to play the cello at such a wonderful event. I can’t wait!”

Karen Gibson and The Kingdom Choir

Also set to perform at the Royal Wedding service is Karen Gibson and The Kingdom Choir. Gibson’s parents are Guyanese. She was born in the UK in 1963 and was educated at Walsingham Girls School.

She is the founder and director of the award-winning Choir, a Christian gospel group based in the South-East of England. The Choir is made up of a group of artists dedicated to creating a sound that demonstrates the community they share and has been performing both nationally and internationally for over 20 years. Over this time, the choir has become known for its united sound, warm energy and enthusiastic performance.

“The Kingdom Choir is truly honored to be invited to sing at the wedding of Prince Harry and Ms. Markle, and very excited to be taking part in such a historic moment,” Gibson was quoted by Kensington as saying. “It will be a moment that we will always treasure, and we’d like to take the opportunity to wish the couple all the very best for their coming union.”

How To See The Royal Wedding In The US? 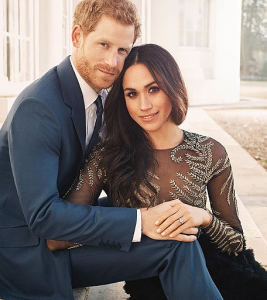 The ceremony begins at noon GMT in the UK or 7 a.m. ET and 4 a.m. PT in the US and will last for one hour. It will be aired live on ABC News, PBS, CBS, NBC, Fox, TLC, E and BBC America with some stations starting coverage as early as 4 a.m. EST.

After the ceremony, the couple will take a carriage ride through the grounds of Windsor Castle, where more than 2,600 invited guests will catch a glimpse of the new bride and groom.