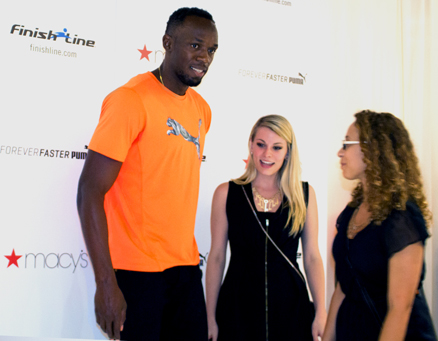 Bolt, who rewrote the history books with his first 100-m world record of 9.72 seconds at the same stadium seven years ago, will interestingly be competing in the BMW men’s 200-m this time around at the Adidas Grand Prix athletics meet, the 7th of the 14 Diamond League series.

In the men’s 100-m, Jamaica’s Nesta Carter is set to compete against compatriots Kemar Bailey-Cole and Nickel Ashmeade as well as Keston Bledman of Trinidad & Tobago.

Jamaica’s Sherone Simpson competes in the women’s 200-m while Anthonique Strachan of The Bahamas is the other Caribbean contender.

The women’s 400-m will see Jamaica’s Christine Day, Anastasia Le Roy, Stephenie Ann McPherson and Novelene Williams-Mills as well as the talented Shaunae Miller of the Bahamas while Kimarra Mcdonald of Jamaica is going up against a large U.S. cast in the women’s 800-m.

Cuba’s Orlando Ortega will compete in the men’s 110m hurdles along with Barbados’ Shane Brathwaite while two of Jamaica’s leading female hurdlers in the Williams’ sisters  Danielle and Shermaine will lead the Caribbean charge in the women’s 100-m hurdles.

A number of Caribbean stars are also set to compete in field events including Jamaica’s O’Dayne Richards in the men’s shot put and Cuban triple jump sensation Pedro Pablo Pichardo.

The Adidas Grand Prix meet represents the last competitive fixture for some top athletes from Jamaica and the United States two weeks before their Senior National trials.

The meet schedule is as follows:

‘Chanel would have hated me’ says Karl Lagerfeld

Venezuela Decrees Day of ‘Loyalty and Love’ for Late Chavez