News Americas, NEW YORK, NY, Fri. Sept. 8. 2017: As Hurricane Irma continued to reign havoc on the Caribbean last night with Florida in its sight, here are 16 latest facts you should know about the storm’s impact to date.

The eye of the storm pummeled Grand Turk, the largest of the Turks islands, and is now moving through the southeastern Bahamas as of 5 AM EDT. As the storm blew through Grand Turk Island, roofs were ripped off dozens of residential homes, streets were flooded and snapped utility poles caused an island-wide blackout, the New York Times reported.

The death toll from Hurricane Irma in the Caribbean is estimated at 9, with the number now lowered to 4 in Saint Martin; three report4ed deaths in the US Virgin Islands; one in Anguilla,  one in Barbuda and Xavier Samuels, a track and field coach in the British Virgin Islands.

British Prime Minister Teresa May on Thursday pledged £32 million to help the British nationals in the Overseas Territories of Anguilla and the British Virgin Islands as well as Turks & Caicos should it suffer damage as well. Foreign & Commonwealth Office Minister Sir Alan Duncan said “initial assessment is of severe damage and we expect that the islands will need extensive humanitarian assistance, which we will of course provide.”

4: 95 Percent Of The Homes On Saint Martin Are Affected

French Prime Minister Edouard Philippe, said Thursday that 95 percent of the homes on Saint Martin were affected by the category five hurricane and 60 percent of them are deemed uninhabitable. In Saint-Barthélémy, he said, there were also numerous destruction of buildings and infrastructure including The Eden Rock Hotel. Guadeloupe suffered some damages but nothing as extensive.

Philippe said 400 gendarmes and 400 civil security personnel were expected to arrive on the islands last night and Red Cross volunteers will also be on hand to help the hardest-hit populations. He said significant material resources have been deployed and barges of water and food will soon be on site as authorities work to restore power to the island.

5: Plans Are Now Underway To Evacuate Barbudans To Antigua.

Prime Minister Gaston Browne said Thursday that evacuation from Barbuda to Antigua, is now voluntary and will become mandatory if Hurricane Jose poses a threat to the islands. Barbuda, he said, sustained widespread devastation with 95 percent of the houses destroyed or damaged. Some houses were totally demolished, some lost roofs and the island is under water and utilities have been damaged.

He said after assessing the damage, the 1,800 people on the island could be accommodated either by relatives in Antigua and for those who could do so, the Government would have to rent private buildings. Browne said it will cost over US$150 million to rebuild the island, a process that will take years.

Dutch Prime Minister Mark Rutte said Thursday that there is “wide scale destruction of infrastructure, houses and businesses” and there “is no power, gasoline or running water.” Saba and St. Eustacius, other Dutch Caribbean territories, also suffered damages.

The British Virgin Islands took a direct hit from Hurricane Irma and the full extent of the damage is still being determined, but cars, trees, homes and boats have reportedly been destroyed.  The tourist board is reporting that most communications remain down, including mobile phone service and Internet access. 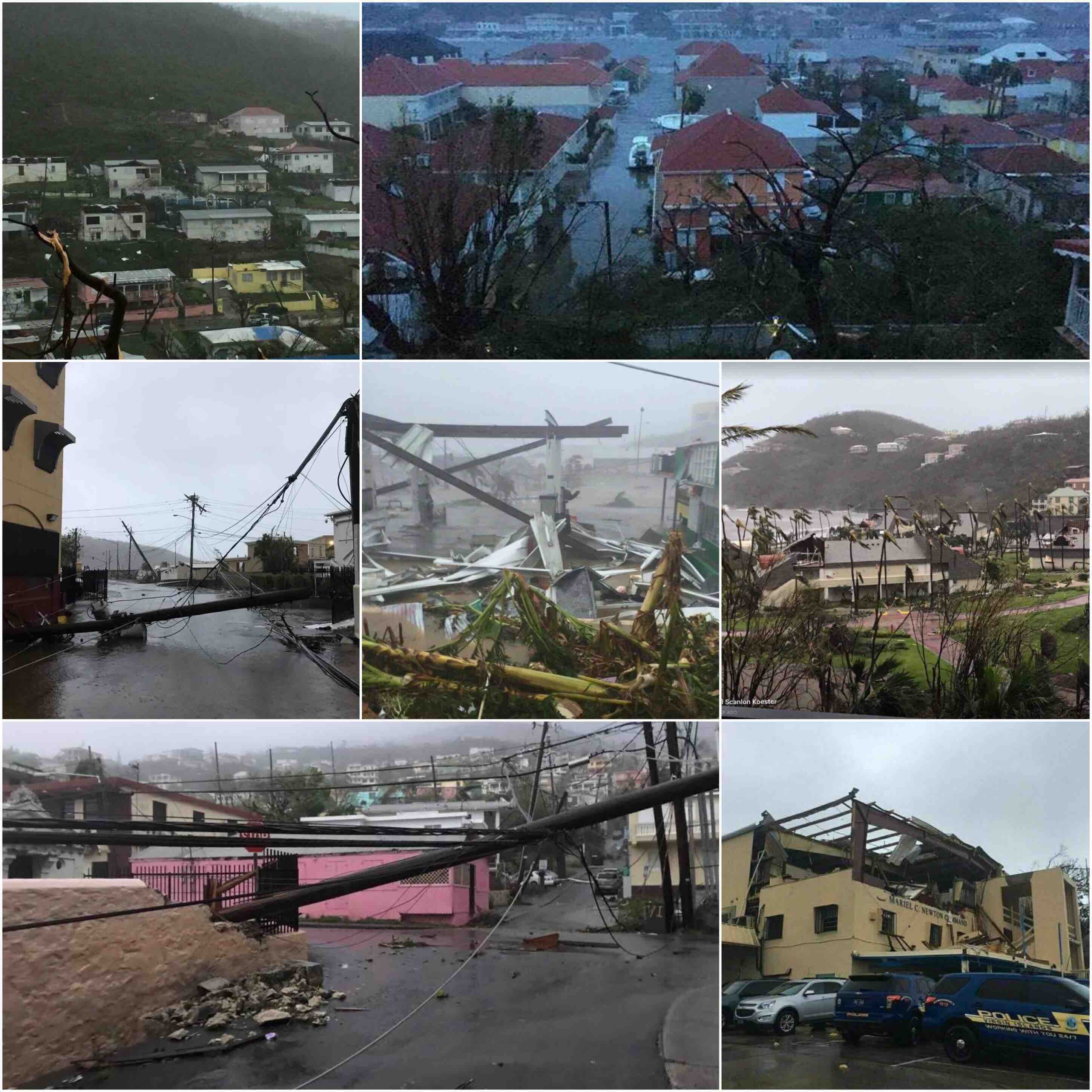 In St. Thomas, Windward Passage will be closed for six months due to Hurricane Irma, while   Sugar Bay Resort & Spa sustained significant property damage, forcing its closure through December 31, 2017.

On St. Croix, the Buccaneer remains open for business, but reports that there may be some limitation of services over the next few days. US President Donald J. Trump declared that a major disaster exists in the territory of the U.S. Virgin Islands and ordered Federal aid to supplement recovery efforts in the territory due to Hurricane Irma beginning on September 6, 2017, and continuing.

The President’s action makes Federal funding available to affected individuals in the islands of St. John and St. Thomas. Assistance can include grants for temporary housing and home repairs, low-cost loans to cover uninsured property losses, and other programs to help individuals and business owners recover from the effects of the disaster. Federal funding is available to the territory and certain private nonprofit organizations on a cost-sharing basis for emergency work in all of the islands in the territory.

10: One million Puerto Ricans Without Power

Puerto Rico Gov. Ricardo Rossello yesterday reported that more than one million people in the country are without power and that crews are investigating the extent of the damage. He added that “it will be difficult to estimate how long the power outage will last.” Ports on the island are still closed and it’s unclear when commercial flights will resume.

It has been reported that Irma’s strong winds and torrential rains affected the Dominican Republic on Thursday, Sept. 7, damaging homes on the north coast of the country. There are no immediate reports of deaths and information is still being gathered.

The storm largely spared Antigua. Antigua’s V.C. Bird International Airport reopened in the afternoon of September 6th to flights into and out of the country. The government reported no loss of life on Antigua and the local population and all visitors to the island are safe. Most residential, business and hotel properties in Antigua remain largely unscathed and already the main roads have been cleared of debris.

The St. Kitts Tourism Authority is reporting that the islands’ tourism providers are in the process of reopening, and hotels are returning to business as usual. Restaurants, attractions and shops, including the popular retail outlets at Port Zante are now open, with The Carnival Fascination confirmed to visit St. Kitts tomorrow as planned.

The Vance W. Amory International Airport on Nevis is open and electricity has been restored across the island as hotels are reporting minimal structural damage, with beach and debris clean-up under way.

Canada, the US and the UK are all warnings it nationals against travel to  The Bahamas, Turks and Caicos, the Dominican Republic, Haiti, Cuba, and parts of the Eastern Caribbean due to Hurricane Irma.

The star-studded Sept. 12 telethon scheduled to help victims of Hurricane Harvey is expanding its reach to include those affected by Hurricane Irma as well. Event organizers say that they are prepared to help in any way they can. Beyonce, Blake Shelton, Barbra Streisand and Oprah Winfrey will headline the one-hour telethon that will be simulcast next week on ABC, CBS, NBC, Fox and CMT. The event will be telecast live at 8 p.m. Eastern on Sept. 12, and on tape delay at 8 p.m. on the West Coast, and streamed live on Facebook, YouTube and Twitter. You can also currently donate to the local Red Cross in your country, including the Antigua and Barbuda Red Cross.

On Thursday, Airbnb activated our Disaster Response Program to assist residents and visitors in the island of Barbuda who are evacuating to island of Antigua in the wake of the destruction caused by Hurricane Irma. Through the program, those in need of temporary accommodations – including emergency relief workers and volunteers –  are able to connect with Airbnb hosts in areas that are safe who are opening their homes free of charge from now through September 28. “We encourage hosts in these safe areas to aid in this effort by listing their available rooms or homes on our platform to help those needing to evacuate,” the company said last night.

Payment of the ‘Double Salary’ Will Help to Stimulate the Federation’s Economy, Says Prime Minister…