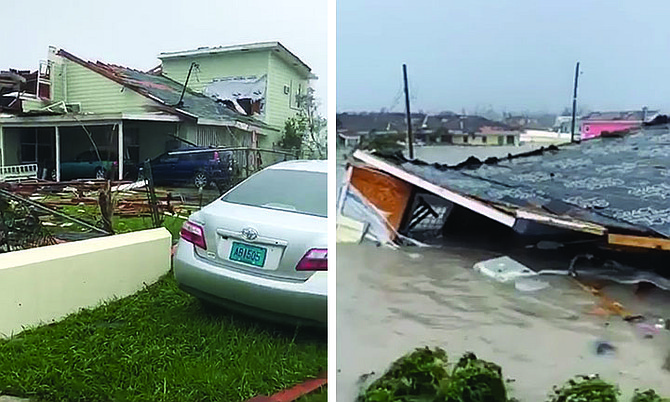 “This is probably the most sad and worst day of my life to address the Bahamian people,” Prime Minister of Bahamas Hubert Minnis said as he broke down in tears at a news conference Sunday after Hurricane Dorian made landfall as a category five storm on Abaco.

Leigh Lamattina-Davis, a 25-year resident of Marsh Harbor, a town of roughly 6,000 on Great Abaco, Bahamas has described the direct hit of Hurricane Dorian as “total devastation” to NBC.

Residents able to post on Twitter about the strongest hurricane to hit NW Bahamas say power lines are down, battered homes, flooded roads, cars on top of each other and alarms blaring and people “wailing.”

In one video, a family could be seen praying in a bathroom. In another, an entire neighborhood appears to have been swallowed by water.

The Bahamas’ Minister of Tourism, Dionisio D’Aguilar said Sunday: “We are very very frightened about potential loss of life.”

As Hurricane Dorian made landfall on Abaco Island in the Bahamas Sunday, U.S. President Donald Trump urged his followers and all Americans to “pray for the people in the Bahamas.”

Authorities were able to rescue people some people from damaged buildings during a three-hour lull in the storm. Most were taken to a government center that was operating as a shelter.

A Guyana-born Toronto Imam is among a number of Canadian Muslims who have been denied entry from Canada into the United States in what some immigration lawyers say is a growing trend.

India looks set to claim a series whitewash against the West Indies, after being set an unlikely target of 468 for victory. The Windies were 45 for two at end of play Sunday.

Brazilian President Jair Bolsonaro is vowing to stop using disposable pens made by the French company Bic amid an ongoing feud with French President Emmanuel Macron.

And about a million people are set to gather along Eastern Parkway in Brooklyn, New York today for the annual West Indian American Day Carnival, the biggest carnival in North America.