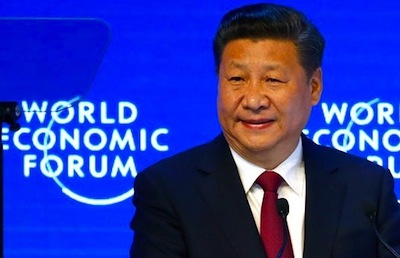 I cannot wait for Trump’s speech in Davos on Friday which only increased my disappointment that the publisher also refused to send me to Davos!

I dreamed of going to Davos as a reporter on Air Force One!

Even with these disadvantages, I will still tell you the TRUTH about Davos and what those 3000 elite ultra-rich and powerful party goers really believe and why they love despots like Xi of China and Trump of the U.S.

It has a name – IDENTITY politics.

The Elites gather in Davos each January to get their ticket punched and renew their “license” to run the world for the rest of us who have no say.

They – I will refer to the Davos attendees here as a group and not be distracted by the credentials of a few who sneak in who are not part of the club –  embrace Xi and Trump because they are just like them.

Do you really expect them to admit it and burst the myth of Davos?

Whether those attending claim to be globalists or not, humanitarians or not, environmentalists or not, feminists or not, liberals or not, progressive or not, etc. etc. is just not all that important. At the very core, what unites them all is far more significant and useful the coins of the realm – power and money.

There is nothing inherently wrong with power or money except it can easily be and usually is used to the disservice of the rest of us and because of the “network” effect. Those in the “network” find it easy and seductive to keep gathering more money and power which they have to get from somewhere.

Yes, from you and me. That is how it works. There is only so much of both.

So China’s Very Strong Man, Xi, was the Biggest Attraction at Davos last January because he and China are a very significant source of wealth and power for the Davos crowd and the fact that Xi heads one of the most oppressive repressive frightening regimes on Earth was not going to be allowed to spoil the Davos party or interfere with networking and partying. They are one and the same at Davos and that can and does result in all kinds of deal making.

So why should President Donald Trump be greeted any less well than Xi? He shouldn’t and he isn’t. President Trump is the Big Attraction this time.

You must never, never, never ever think of the socalled Word Economic Forum at Davos as an engine of INEQUALITY, environmental degradation, encouragement for brutality, repression or hopelessness across the Globe.

That would be no fun at all for the Davos PARTY goers. STOP IT please!

Don’t get me wrong; there will not be wild cheering in public for Donald Trump and many of those in the audience with coveted seats for President Trump’s closing speech Friday will be quietly whispering negative comments to each other about Trump to protect their self-delusions about who they really are and why they are at Davos and what they get there.

They must keep reminding themselves that those who go to Davos – and it costs a lot to go to Davos for this party this so called World Economic Forum – they must be reassured that they are the world’s conscience and that they possess the intelligence and the passion to improve OUR world for us.

They are there in Davos as a self-sacrificing gift to the rest of us.

Thank God for Davos and that President Trump is there for us! Amen.

Next week its back to the Grindstone for all of them and me too!