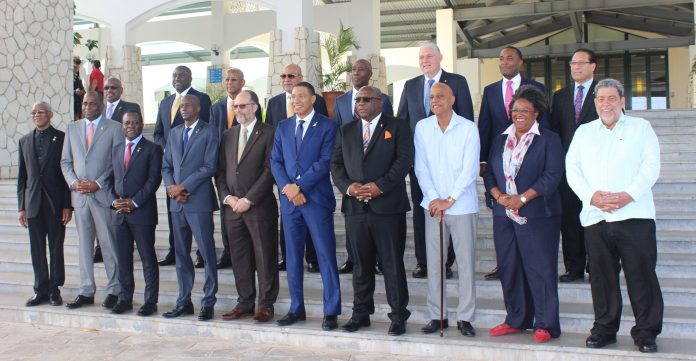 News Americas, LONDON, England, Weds. July 18, 2018: Most politicians connect with their electorate, but few have the capacity or charisma to be able to encapsulate complex ideas in a manner that makes disinterested and disaffected individuals, irrespective of political persuasion, stop and think about what might be possible.

It is not to make a partisan or political point to say that at the recently ended Heads of Government meeting in Jamaica, Barbados’ Prime Minister, Mia Mottley, came close to this, being able to demonstrate in her opening remarks, in interviews and at the closing press conference, the ways in which one might imagine the regional integration process being able to improve peoples’ lives.

In Montego Bay, she exhibited an ability to go to the heart of the matter, speaking convincingly about issues from free movement to the problems of regional aviation, and what the reinvigoration of the Caribbean Single Market and Economy (CSME), could mean for ordinary Caribbean citizens.

This is not to lessen the significance of the role played by CARICOM’s pro tempore Chair, Jamaica’s Prime Minister, Andrew Holness, in using the Golding report to create awareness of the urgency of addressing the CSME’s failings and the detail of what needs to be done. Nor is to decry the various contributions of other Prime Ministers, but to illustrate the need for Heads to address in a transparent and straightforward manner issues that make the idea of regional integration credible.

To be blunt, much of what was interesting about the recently concluded CARICOM Heads of Government meeting in Montego Bay was not in the summit’s formal, dry-as-dust communiqué or the predictable inter-regional arguments.

Rather, it was in the detail and color that emerged in the closing press conference, the remarks made by prime ministers as they returned home, and what was said by Ms. Mottley before, after and at the summit.

Observing all of this from afar, reading the coverage and speaking with some of the participants, what emerges is an encounter with several positive developments, still to be resolved bureaucratic and political problems in delivering on a pan-CARICOM basis what has been agreed, and the need for a much-improved approach to communications by the region’s political leadership to help drive change.

Setting aside the substance, the Montego Bay summit was characterized, even driven by three main themes: concern about the inability of the Caribbean Single Market and Economy (CSME) to move forwards and spur regional economic development; fear that inaction has caused the regional integration process has become irrelevant to citizens, and particularly the young; and a need to find ways to demonstrate and deliver value to civil society.

What emerged was the need to demonstrate to a fragmented and doubting region the need to take practical, rapidly deliverable decisions that connect with ordinary citizens, and to make these known in less formal and more accessible ways.

In an important indication of how the integration process can be made relevant to ordinary lives, came when six states – Barbados, St Lucia, Grenada, Suriname, Jamaica and Haiti – signed a Protocol on Contingent Rights, allowing for persons who work across the region to have their spouses and children join them. Heads also agreed to common procedures on the refusal of entry of CARICOM nationals travelling across the region.

Of similar significance were the decisions taken to reinvigorate the CSME.

While putting off a full discussion until November of this year may look like kicking the can down the road, the content of what is to be considered then will determine whether the regional economic integration really has a future. This is because heads agreed measures only attainable though achieving a rapid consensus on issues that will require real compromise, and the partial sharing of national sovereignty.

What was agreed was that CARICOM would seek to advance support for measures to make the CSME more competitive, including an agreed regional investment policy and investment code, an incentive regime, an integrated capital market, and initially regional securities legislation, and to have the process complete by the next full summit in July 2019.

For those not in the political class, in business, the higher reaches of the public sector or academia these are meaningless concepts unless the benefits of such changes are explained simply.

Thankfully, in Montego Bay they were given life of sorts by Barbados’ Prime Minister.

In an intervention at the final press conference which was streamed live, she indicated the background to and substance of what is intended.

Ms. Mottley noted that before Heads had met a summit of the Council of Finance Ministers (COFAP) had been held: astoundingly the first such encounter in ten years.  This she said had agreed that the integration of capital markets, a unified financial services architecture and a common policy for investment were critical to making the single market work more effectively for those who want to invest across the region. The plan was she said to meet in late September in Barbados after consultations to move the process forwards.

Then, speaking in terms that everyone might relate to she said she would like to believe that this could mean that Barbados’ citizens with collective savings of about Bd$9bn (US$4.5bn) could have the opportunity to gain a larger return if there were investment opportunities in other regional jurisdictions.

It was a small point, but one that brought the deliberations of the regions’ leaders into the real world, the everyday.

Speaking to the Jamaica Gleaner, just before Heads met, Dr. Terri-Ann Gilbert-Roberts, a former youth ambassador and now a research fellow at the Sir Arthur Lewis Institute of Social and Economic Studies, made the point that “People don’t know exactly what decisions are being taken and they don’t know what are the factors that have influenced the lack of implementation of certain things”. She suggested that that the time had come for millennials to lobby for a regional freedom of information protocol.

At the press conference following the summit Prime Minister Holness, speaking as Chair, said that regional leaders were “resolved to now begin to implement the decisions we take to improve the perceptions, especially amongst our youth.”

In her opening remarks and at the closing press conference Ms. Motley proposed a seemingly heretical idea.  She suggested that the exchanges between Heads “in plenary, not in caucus, ought … to be the subject of instant streaming broadcast so that our people can understand what we are doing, (and) why we are doing what we are doing.”

I for one, hope that Caribbean leaders can overcome their innate conservatism and join Ms. Mottley, Mr. Holness and Dr. Gilbert Roberts in recognizing that if CARICOM is to have a future it must communicate better in ways that draw citizens and especially the young into imagining what might be possible.

EDITOR’S NOTE: David Jessop is a consultant to the Caribbean Council and can be contacted at david.jessop@caribbean-council.org

A Minute With: Gemma Arterton on choosing roles, new challenges

Exploiting Violence In The Black Community