Home Commentary Experts Explore Guyana’s Emergence As An Oil Producer And Implications For The... 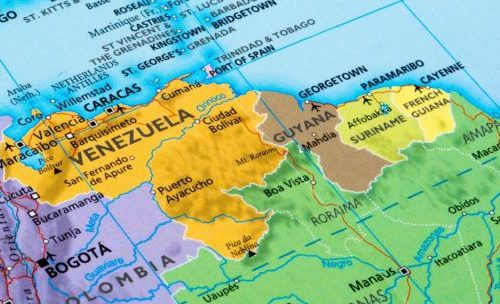 News Americas, NEW YORK, NY, Mon. Sept. 26, 2022: The fourth episode of the Guyana Business Journal (GBJ) and the Caribbean Policy Consortium’s (CPC) Webinar Series, “Transforming Guyana,” got underway on Wednesday, September 14th, with a discussion centered around “Guyana’s emergence as an oil producer and implications for the future of the Venezuela-Essequibo controversy”; with a focus on local and global imperatives for Guyana.

The GBJ CPC monthly webinars bring together experts and prominent voices from Guyana, the Caribbean, and the diaspora, to discuss the impacts of Guyana’s oil and gas industry and to offer a nuanced look at opportunities, potential pitfalls, and strategies to maximize the positive effects of the country’s oil revenues.

This episode’s panelists included the Tenth Vice-Chancellor and Principal of the University of Guyana, Dr. Ivelaw Griffith; Senior Fellow of the Institute of International Relations at the University of the West Indies, Dr. Anthony Bryan; Guyana’s former Ambassador to the United States of America, Riyad Insanally; former Foreign Secretary, Guyana, Carl B. Greenidge; and Dr. David E. Lewis.

GBJ Founder and Associate Professor Dr. Terrence Blackman explained that the title was suiting since Guyana’s economy heavily depends on the extraction and export of oil or natural gas. He highlighted 2020 data, which shows that crude oil and gold account for about 60% of Guyana’s exports.

Former Foreign Secretary Greenidge, addressing the nature of the Guyana and Venezuela controversy, clarified that contrary to what is often reported, the issue does not concern a dispute over maritime space but rather land boundary, and he emphasized that Venezuela’s claim amounts to three-quarters or 74 % of Guyana’s land surface. “The maritime space is a separate matter. International law says your maritime space is defined by the land boundary and, in particular, by the coast; then, it does have implications, but in the first instance, it is not a judgment as to whether or not a particular piece of maritime space belongs to Guyana. It’s not a question of whether Guyana can continue exploiting the petroleum resources lying offshore”. “The court has indicated that it will restrict itself to whether or not the 1899 agreement was ultra-vires, i.e., meaning beyond its the powers, or not…” he said.

Greenidge said the court’s decision is intended to solve at least part of the problem on whether a court decision will settle the border issue for good. “We have problems in terms of investors, bilaterals, multi-lateral agencies, and it does appear that many of them feel this is just a contention by two separate states. We can’t resolve it, and therefore they leave it. Suppose the court looks at the matter, just as the court was able to pronounce definitively that Venezuela agreed that the court could look at the matter; in that case, the question of the 1899 award can be definitively determined by the court. You have judges drawn from elsewhere, including Venezuela and Guyana, who will pronounce on the matter just as they definitively pronounced on the jurisdiction,” Greenidge contended. He said a court decision would have to confirm maritime space, and Guyana and Venezuela would have to sit and resolve the matter.

Prof. Anthony Bryan said Trinidad has always supported Guyana’s integrity, though there’s a strict policy of non-interference. “Although there is full support for Guyana’s position, we must be aware of the real politics. Gas production in Venezuela has been severely constrained due to its abysmal investment climate and the fact that its national oil company has always been interested in oil more than gas. Despite all of that, I expect that Trinidad and Tobago will have to conduct a very skillful game of diplomacy concerning Venezuela and its claim over the Essequibo Region. We are a Caribbean Community (CARICOM) country, and we will support Guyana’s territorial integrity”, Bryan said, noting that he is still concerned by Venezuela’s claim to Essequibo. “In 2020, the Venezuelan government ordered its Navy to redefine the nation’s maritime boundary and its exclusive economic zone. Now that the International Court of Justice has agreed that they can hear Guyana’s objections to Venezuela’s claim because of ‘dubious treaty obligation assigned almost a century ago, the Venezuelans say; it raises the question of whether several independent Caribbean Island states may also have to fight legal battles to maintain their maritime sovereignty.

Dr. Insanally, outlining key imperatives for Guyana from a broader perspective in diplomacy as Guyana’s first line of defense, said the country could not rely on the ICJ alone. He noted that considerable diplomatic efforts have to be made to complement the legal process. “We have a robust case. The fact that the Venezuelans are ever reluctant to go to court, that they didn’t want to recognize the jurisdiction of the ICJ and that they are employing delaying tactics point to the fact that they don’t have a case. However, we can’t just sit back and think that we will necessarily win the case because our cause is just because we feel we are right. We have to continue to persevere with efforts to keep the spotlight on the merits of our arguments,” he stressed.

Insanally pointed out that politics is still a factor and that Guyana’s government requires a narrative that goes beyond a legal one. He further noted the importance of educating the affected population on the issue and the need to stay active on the diplomatic front. “Now that the case is before the ICJ and the process is on the way, there should be no diminishing of diplomatic efforts to keep our friends apprised and to convince allies and others of the rightness of our position; and, above all, maintain support for the process and eventual acceptance of its outcome. The case is on its way, and we could not afford to lower our diplomatic guard”.

Insanally noted that since he was Ambassador to the US, it has been steadfast in its support of Guyana’s territorial integrity and the position of the 1899 award, in which it also played a critical role. He noted the same stance for Brazil. “Even if Venezuela comes back to the fore with the reports we’re getting about the energy crisis, we must remember that Guyana is no longer a non-entity. On the contrary, we have assumed greater geo-political, geo-economic and geo-strategic importance because of our oil and gas discoveries. So, we are important and relevant, which should stand in our favor”.

Professor Ivelaw Griffith deemed Venezuela’s claim an existential threat to Guyana. He noted that it undermines Guyana’s land, people, resources, and identity – which he highlighted are vital factors of nationhood.

“If you were to remove the Essequibo from Guyana, you’d be left with 21,400 square miles, about half the size of Cuba. So we’re talking about a significant set of implications regarding the land dimension,” he said. However, he also noted that the implications go beyond the land to Guyana’s people. Griffith pointed out that as of this year, Guyana has little over 800,000 people, with over 300,000 living in Essequibo. Griffith further pointed to four key imperatives, some of which he noted Guyana has already implemented. These include judicial engagement, defense diplomacy, public education, and security investment. He said diplomacy was the first line of defense and an essential vehicle for promoting cooperation.

He said this has been working in Guyana’s favor concerning claims by Venezuela and Suriname. “We’ve got to manage international engagement and affairs on the regional and international landscapes to enable people to understand the nature of the claim, the nature of the controversy, and the importance to Guyana in maintaining the arbitral award of 1899. It is valid, and it’s binding”, Griffith opined. He expressed that Guyana is no match and does not need to match Venezuela’s security establishment, which can serve as a first-level deterrent. Griffith noted, however, that the security investment imperative must be part of managing the existing threat.

Guyana requires a narrative that goes beyond the legal one, and it must be continuously repeated at every possible opportunity. The Venezuela-Essequibo controversy is an overriding Guyanese foreign policy imperative. Guyana cannot afford to lower its diplomatic guard while they wait for Venezuela’s next move. As Prof. Bryan noted, “In this age of social media, we need all Guyanese, not just government officials and diplomats, but also journalists, members of civil society, and members of our diaspora to be advocates of our united national narrative.”

EDITOR’S NOTE: Utamu Belle is an award-winning Guyanese journalist with a career spanning over a decade. Her experience includes writing for print, television, and online media. She has worked as a Radio and Television host. She is the Founder of A-to-Z Media (Guyana), a News and Digital Editor with Upscale Magazine, and a Digital Coordinator/News Editor with The Guyana Business Journal and Magazine.

Dr. Terrence Richard Blackman is a member of the Guyanese diaspora. He is an associate professor of mathematics and a founding member of the Undergraduate Program in Mathematics at Medgar Evers College. He is a former Dr. Martin Luther King Jr. Visiting Professor at MIT and a member of The School of Mathematics at The Institute for Advanced Study. He previously served as Chair of the Mathematics Department and Dean of the School of Science Health and Technology at Medgar Evers College, where he has worked for more than twenty-five years. He graduated from Queen’s College, Guyana,Brooklyn College, CUNY, and the City University of New York Graduate School.