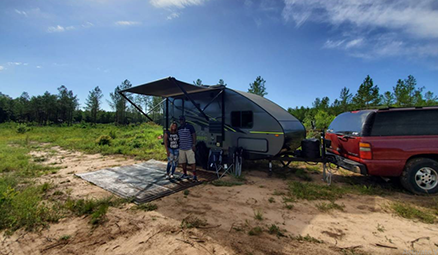 WASHINGTON, D.C. Tues. May 25, 2021 (Thomson Reuters Foundation) – Haunted by the COVID-19 pandemic’s disproportionate impact on Black people and reports of police violence against their community, a group of families in the southern state of Georgia have banded together to create a town called Freedom.

“We were watching the murders of Ahmaud Arbery, George Floyd, Breonna Taylor and all of the other people we can name,” said Ashley Scott, one of the effort’s organizers, referring to Black victims of police violence killed last year.

“My friend and I were just depressed and feeling like we needed to be able to do something to protect our husbands and sons.”

They found a 96-acre (39-hectare) property for sale in central Georgia, and came up with a 10-year-plus timeline and a vision of using the land to build intergenerational wealth, something financial experts say is key to closing the racial wealth gap.

The families purchased the property in August 2020, and after some social media and news coverage, “we went viral,” Scott, 34, a realtor in Atlanta, told the Thomson Reuters Foundation in a phone interview.

“We had thousands of people reach out saying they wanted to move to Freedom.”

Aiming to be a model for equity, energy efficiency, local food production and more, the Freedom project has drawn political support as an opportunity to build a community from the ground up.

“It’s truly a situation where we’re taking our destiny in our own hands,” said Democratic State Representative Mandisha Thomas, whose district does not include Freedom but who sits on the project’s advisory board.

Even as they wade through the logistics of how to set up the complex systems an incorporated city would need, Scott and the others behind the initiative are planning to break ground by next year, starting with a visitor and conference center.

Speed is important, Scott said: “We don’t know when another George Floyd might happen. We want to move as quickly as possible to create this safe haven, so we can replicate it.”

Haitians, Cubans Among Those Stuck In Colombia’s Caribbean Town