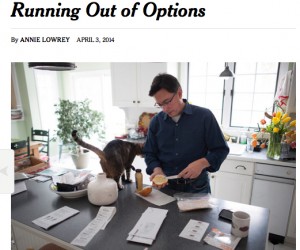 Since this is really material for readers of Obama’s America.

I have no idea if President Obama reads the New York Times or if he is just too busy doing nothing useful most of the time. But even if he reads The Times and saw this article I am sure he did not have a clue.

The article titled “Out of Work, Out of Benefits, and Running Out of Options” chronicles the woes of Abe Gorelick, 57, of Massachusetts who was a high paid marketing executive and is now is now just struggling to survive and with future prospects that range from bad to worse or hopeless.

I’ll provide the link to the article at the end AFTER your read mine which is far more important. The Times presents Gorelickk as representative of a wider problem which is fine except that the Times does not understand the REAL problem and I do and you need to ….

And this gives me another useful opportunity to write about it even as I waste my time trying to explain it to Obama who again who  doesn’t have a  clue.

“Five years since the recession ended, it is a story still shared by millions. Mr. Gorelick, 57, lost his position at a large marketing firm last March. As he searched, taking on freelance and consulting work, his family’s finances slowly frayed. He is now working three jobs, driving a cab and picking up shifts at Lord & Taylor and Whole Foods.”

Later in the article ….

“In Washington, the plight of the long-term jobless has largely faded from the policy conversation. At the moment, the federal government offers virtually no help to the 3.8 million Americans who have been out of work for more than six months. The maximum duration of unemployment insurance payments fell from as long as 73 weeks to 26 weeks in most states in January.”

So even with this interpretation of the problem by The Times President Obama comes up short. Obama being President has done nothing for the long term unemployed no matter how much he laments such problems.

Back to the article The Times begins to hint at the real problem ….

“Yet there is increasing evidence that a stronger recovery alone might not significantly aid the country’s long-term jobless. Even before the latest monthly job figures are released on Friday, short-term unemployment has fallen to its pre-recession level, but long-term unemployment remains more than twice as high as it was in 2007.”

Then The Times offers ridiculous solutions …

“Intensive career counseling might help the long-term unemployed, Mr. Sharone and his colleagues figured. Coaches could help the long-term jobless optimize their résumés, refrain from flagging in their job searches, make new connections and beat common human resources screening techniques. And if career counseling does not reduce the jobless rate, that would be valuable to know too.”

Bla Bla Bla … give us a break …better to go to church and pray!

Finally I will quote The Times final prophetic line …

“There are models that work,” he said. “But god, considering the magnitude of this problem, you worry that it is not enough.”
YOU THINK? Maybe they don’t have an answer for Gorelick or others.

So dear readers allow me to tell you what is really happening to Abe Gorelick of Massachusetts and all the rest of us just as I wrote The Times earlier today and was printed as a comment to their story.

Are you READY for The Truth? Obama isn’t or is he just playing golf.

What we are witnessing is the beginning of the most fundamental change in human society since the rise of Homo Sapiens 200,000 years ago. Automation, robotics and smart technology generally are replacing human labor of all sorts in the very same way Homo Sapiens replaced less efficient Neanderthals long ago.

Those who think what is taking place is anything less are fooling themselves thinking some new “magical” industries will emerge to replace jobs lost everywhere else.

We can either ignore what is taking place and go the way of the Neanderthals maybe not disappear but most humans reduced to a hard scrabble existence or we can learn the fundamental lessons of evolution and adapt and prosper by addressing the fact that automation and robotics will ultimately replace all traditional labor as it has started doing at an accelerated pace.

The question all of us and our “leaders” most of all should be addressing actively every single day is how do we insure a prosperous inclusive economy, nation and society in a world where most of us no longer have the kind of employment that has sustained Capitalism “forever.”

We need to invent and provide new means for the vast majority of Americans to earn a fair share of the wealth that will increasingly be generated by automated processes and robotics and formerly by human labor be it physical and lower paying or more cerebral and well paying as it all gets replaced by non-human processes.

That is what is going on. Are you ready??

President Barack Obama certainly is not.

Personally it does not matter to him since he is one of the Elite who is protected from Change as one of the rich and powerful but for how long?

Morena Resort: An island resort with a heart of gold