Far more interesting is all the chatter all over the media about how fundamentally different Obama and Romney are. How different things will be if one or the other wins this election. Even that this is the most significant election since Franklin Roosevelt.
Please give me a break!

Granted, electing Romney will be a disaster bur not on so called fundamental issues. The difference is Mitt Romney bends over even further for the Super Rich than Obama.

The reality is that whether Obama is re-elected or Romney is elected the number one issue and growing problem will not be addressed – just as the phony Change Master Obama did nothing about real inequality the last 4 years.

Whether or not the Bush tax cuts are extended for the rich or not is nothing but very small pocket change that will do nothing to address the ever widening gap between the very rich and all other Americans. Never in American history have so few owned so much wealth and that includes all the past eras of excess.

And Obama never ever says anything about this central problem and does even less about it. Romney forget about him Mitt Money Romney is one of them on the list of the 1%. There is nothing as disruptive of a democracy or a stable state than the gap between the super rich and the rest growing far too big.

Read all about it in the current issue of one of the most informative publications on Earth The Economist in its current issue. It contains a special section titled “ For Richer, For Poorer.”

The Economist takes a close look at inequality throughout the globe including specifically in the United States. The analysis isn’t good for anyone except the Super Rich. Romney claims the rich are paying too much tax that the government is stifling them.

Really Mitt Romney??? The rich are swimming in money. Literally drowning in it they have so much. But they want more!

Let’s turn directly to the pages of The Economist …

The article titled “The Rich and the Rest.” …

“Over the past 30 years incomes have soared both among the wealthy and the ultra-wealthy. The higher up the income ladder, the bigger the rise has been. The result has been a huge, and widening, gap—financially, socially and geographically—between America’s elite and the rest of the country.”
“Between 1979 and 2007 (just before the financial crisis) the real disposable income after taxes and transfers of the top 1% of Americans more than quadrupled, a cumulative rise of over 300%.

Over the same period the bottom fifth’s income rose by only 40%. The middle class shrank, both as a share of the population and
geographically. Only 40% of American neighborhoods now have an average income within 20% of the national median, compared with 60% in the 1970s.”
“The recession temporarily upended this trend. America’s wealthiest fared poorly in 2008 and 2009, largely because the tanking stock market ravaged their bonuses and share options. The government safety net prevented a collapse at the bottom. But the sluggish recovery has brought back the old pattern. More than 90% of all income gains since the recession ended have gone to the top 1%.” Get the picture it is Fat City for the rich in America.

And it is only going to get worse whether Obama is re-elected or Romney elected whether or not the Bush tax cuts are extended to the rich is literally meaningless. The rich will get richer.

Read this from the same article …

“The country’s top rate of income tax has been repeatedly slashed since 1980, from 70% to 35%. By itself, that reduction has not greatly affected average tax burdens at the top (since there have been enough loopholes to ensure that few people paid the top rate). America’s richest have gained more from reductions in the capital-gains tax, which is now only 15%. Private-equity moguls have done particularly well, since the tax code allows them to classify their income as capital gains.”

And here is something fundamental to why Obama and Romney are in truth far more alike than different they both drink at the same trough of wealth be they slightly different parts of it. They both gobble up those $40,000 a plate campaign checks just as fast as dinner can be served. They both owe the 1% Big Time and how do they ultimately reward them one way or another by making them richer still with government policies that reward them more one way or another most often well hidden.

Again from the article and the special section ….

“The combination of tax loopholes, bank bail-outs and massive lobbying has led many observers to conclude that America’s growing inequality has political roots. The wealthy, in this logic, control the political system and rig it to their advantage. In an influential book, “Unequal Democracy: The Political Economy of the New Gilded Age,” Larry Bartels of Vanderbilt University showed that senators’ votes are influenced by the preferences of their rich citizens but not their poor ones. As money plays an ever bigger role in politics, goes the argument, so the clout of the ultra-wealthy grows, particularly to block things they don’t like.”

“The democratization of living standards has masked a dramatic concentration of incomes over the past 30 years, on a scale that matches, or even exceeds, the first Gilded Age. Including capital gains, the share of national income going to the richest 1% of Americans has doubled since 1980, from 10% to 20%, roughly where it was a century ago. Even more striking, the share going to the top 0.01% – some 16,000 families with an average income of $24m—has quadrupled, from just over 1% to almost 5%. That is a bigger slice of the national pie than the top 0.01% received 100 years ago.”

The bottom line is that there is a fundamental flaw in our societal compact that unites us all under one nation. It will always exist to some extent. In fact reasonable differences in equality are essential to a vibrant society. Excessive inequality is absolutely not.

If the trend is not reversed in America it spells big, big trouble. There is nothing on the horizon to reverse it. The opposite is true all the underlying conditions favor the rich getting even richer in the coming years and everyone else getting poorer at their expense.

So pundits or you or anyone can argue to you are blue in the face how different Obama and Romney are. Those differences are ultimately superficial because they do not address the fundamental problem of the economic disparity between the very wealthy and everyone else and the further down you are the worse it is.

As I argued in another recent Commentary the age of jobs is over forever the fact that less and less of us will have good long term upwardly mobile jobs will accelerate the disparity to the breaking point. And all Obama and Romney have to argue about is should the rich pay slightly more or less.

So take your choice Obama – be he less bad, or Romney, it really won’t make any difference at all in the one way that truly counts above all others the level of growing inequality in America.

Heads we lose tails we lose. The game is rigged for the Rich. 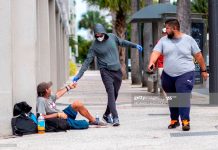 Flash Back – Jamaican Immigration To Britain

A map to great melodies – Stuff.co.nz