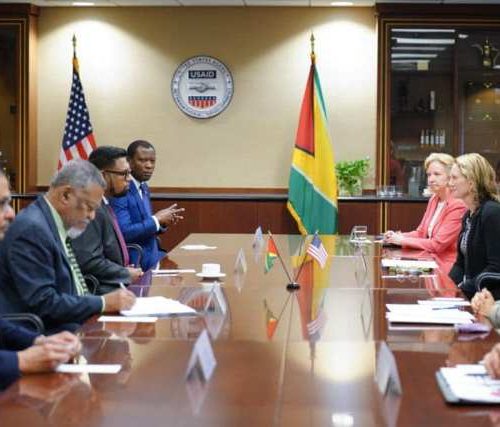 News Americas, NEW YORK, NY, Mon. Aug. 1, 2022: In May 2015, when the government of Guyana, through global oil investors, announced that oil was discovered in significant quantities offshore, economic transformation and development became state actors’ preoccupation. The discoveries meant that Guyana’s post-independent realities, primarily shaped by geopolitical contours that have impacted its financial and governance structures for decades, were about to shift.

Schreiner Parker, Rystad Energy’s SVP and Head of its Latin American operations, speaking at the Guyana Business Journal (GBJ) & Caribbean Policy Consortium July 21, 2022, Webinar, GUYANA UPSTREAM: A RYSTAD ENERGY INDUSTRY AND COUNTRY BENCHMARKING UPDATE, noted that initial prospecting for Guyana’s black gold commenced as early as the 1940s and continued into the 1960s. However, following Guyana’s independence in 1966 and its embrace of a socialist national development model, Guyana did not aggressively embrace the search for oil. The nation’s leadership resisted foreign investment and viewed western interests in Guyana’s mineral resources with suspicion as it sought to escape the shadow of colonization.

Now, more than fifty years after gaining its independence from Britain, Guyana’s emerging pro-investment ethos has changed its foreign investment posture. Oil giants, including the US-based Exxon Mobil, punctuated local and international news headlines based on the 2015 oil discoveries. The oil wells discovered there since 2015 accounted for 18 of the top 30 most significant offshore discoveries. As a result, Guyana has become a prime repository of the industrialized world’s most sought-after resource for economic expansion. These resources signal an unprecedented opportunity for the nation’s holistic transformation based on oil revenues.

The most recent forecasts by leading global energy analysts at Rystad Energy point to a nation on the threshold of astonishing wealth. Rystad estimates that Government revenues from oil production could reach as high as $1.5 Bn USD this year depending on prices and an average of $3.6 Bn per annum through 2030 (and $12.4 Bn annually between 2031 and 2040). Furthermore, Rystad Energy forecasts production to result in Guyana’s fortunes peaking at $16 Bn per year in 2036. Cumulatively, this amounts to an estimated $157 Bn for the state by 2040. It bears noting here also that in a world acutely sensitive to the intersection of fossil fuel resources and climate change and its implications for Guyana’s environmental footprint, the emissions intensity of Guyana’s production is nine kgCO2/boe–half of the global average. Guyana is threading the proverbial needle, and in this regard, the report notes that she can outperform ~75% of global producing assets.

Guyana’s transformation is an inevitable reality. However, the Rystad report notes that concerns persist around transparency issues and the state’s efforts to ensure that the legislative framework is in place to secure and safeguard its transformation. Guyana is rated “fairly low” in this regard. The EITI found “weaknesses in company reporting and tax administration policies that prevent public supervision of oil and gas revenues.” Rystad sees the implementation of new governance mechanisms and institutions, based on global best practices, as critical to the state’s management of its oil wealth. Rystad Energy noted that the 2021 amendment of the Natural Resources Fund Act passed in 2019 and the Local Content Act 2021 were vital steps in the right direction but work still needs to be done.

The Rystad report makes it clear that Guyana is firmly on the path to long-term change; its leadership must judiciously safeguard this transformation through an intentional engagement with the citizens of Guyana and other key stakeholders. Moreover, the report clarifies that if Guyana succeeds on this journey, its socio-economic and political economy must become more inclusive, transparent, and accountable. These components, the Rystad report concludes, are equally vital to securing the nation’s transformation.

EDITOR’S NOTE: Dr. Carolyn Walcott is a media and communications educator and scholar with a diverse background in journalism education, international communication, and media development. Her research agenda includes media pedagogy, political rhetoric, and social change. She is an assistant professor of Communication and Media Studies at Clayton State University and teaches both undergraduate and graduate courses remotely for the University of Guyana. She previously served as Director at the U.G. Centre for Communication Studies (UGCCS), where she coordinated international capacity-building seminars to enhance journalism practice in Guyana. Her professional media and development consultancies include strategic mapping and intervention designs for agencies such as UNDP, UNICEF, and WWF. She completed her undergraduate education at the University of Guyana and graduate degrees at Ohio University (M.A-Communication &amp; Development) and Georgia State University (Ph.D.), respectively.

Dr. Terrence Richard Blackman is a member of the Guyanese diaspora. He is an associate professor of mathematics and a founding member of the Undergraduate Program in Mathematics at Medgar Evers College. He is a former Dr. Martin Luther King Jr. Visiting Professor at MIT and a Member of The School of Mathematics at The Institute for Advanced Study. He previously served as Chair of the Mathematics Department and Dean of the School of Science Health and Technology at Medgar Evers College, where he has worked for more than twenty-five years. He graduated from Queen’s College, Guyana,Brooklyn College, CUNY, and the City University of New York Graduate School.