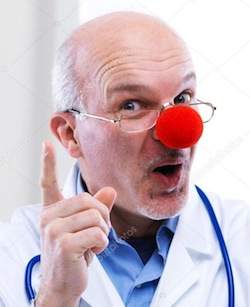 President Trump obviously got what he paid – nothing for nothing in return but a Whacky Diagnosis only he would believe. The fat old and biggest Nut Job ever to be President of the United States. Nobody else is even close.

President Trump passed his physical with a “perfect score” which he could only receive in the Twilight Zone. Welcome to Rod Serling’s universe. Da, da, da, da – where Donald Trump lives. You have entered another dimension of time and space … a journey into the frightening world of Donald Trump.

That classic TV “horror” show ran for 150 weekly episodes. So far President Trump’s horror show has run for 52 weeks here in Trump’s America that coincides with the first anniversary of Trump becoming so called President.

Welcome to year two of The Trump Horror Comedy and episode # 53.

So let’s first get back to Donald Trump’s Presidential Physical which should have taken place in an Asylum and compare fact and Trump fantasy.

Another Trump’s America EXCLUSIVE nowhere else – not even FOX & Friends or CNN have the REAL results of the physical Trump did not have. Then at the end of this episode I offer something you will not find anywhere else – like so much here in Trump’s America ….

A not so RADICAL cure for Trump but not without risks to the rest of us.

Now to Trump’s physical first the so called physical part.

All you have to do is look at Trump in one of those rare golfing photos – thank God he is never seen in a bathing suit – that would be very tough to endure – but those rare golf photos that get taken as much as he tries to avoid them at all cost and when he is not in his expensive suits – there is no doubt Trump is FAT. Add to his girth, to Trump – exercise is a very alien concept. As alien to Trump as treating “aliens” with dignity and respect.

President Trump treats his body like he does aliens! Speaking of treats -they seem to be his main form of nutrition along with BIG macs and lots of soda. Trump has a “diet” (sic) that should be labeled “gravedigger’s delight.”

“WASHINGTON — Cardiologists not associated with the White House said Wednesday that President Trump’s physical exam revealed serious heart concerns, including very high levels of so-called bad cholesterol, which raises the risk that Mr. Trump could have a heart attack while in office.”

Compare that to the FAKE news Trump put out about his so-called health.

More from The Times article Wednesday after Trump’s physical ..

“Several ( expert physicians ) said Mr. Trump’s goal should be to get his LDL below 100, or even under 70. He has a real risk of having a heart attack or stroke, especially considering his weight and lack of exercise, they said.”

“He has a real risk of having a heart attack or stroke, especially considering his weight and lack of exercise, they said.”

Enough said. President Donald Trump physically is a MESS and in need of serious intervention, but I can guarantee he will never admit to this.

Time to move on to the larger issue for the rest of us  – President Trump’s MENTAL health.

Wait a moment – let’s get the FAKE news from The White House ..

“Trump Has Perfect Cognitive Test Score, White House Physician Says.” That is the headline from The New York Times.

None other than Dr. Ronny L. Jackson, a Rear Admiral in the Navy. That is right – the Navy. What does anyone think would happen to Rear Admiral Jackson if he told the world Trump is loony CRAZY?

Rear Admiral Jackson might get sent to Guantanamo by Trump for the rest of his career to take care of the prison dogs there – and he’d have to be considered lucky for that.

So here is what Rear Admiral Jackson did say as reported by NY Times ….

“I’ve found no reason whatsoever to think the president has any issues whatsoever with his thought processes,” Dr. Ronny L. Jackson, a rear admiral in the Navy and the White House physician, told reporters on Tuesday.”

whatsoever with his thought processes.”

What exactly does that mean?????

One could also say Hannibal Lector of scary horror movie fame “has no issues whatsoever with his thought processes” as well if you want to be very kind to him while saying NOTHING of substance about his mental state. You might even say he had a “brilliant” ( sic ) mind in his own way.

Too bad Rear Admiral Jackson did not run some real tests OR look at the facts on the ground in declaring Donald Trump in “perfect” mental and physical health OR all he had to do a look at Trump’s twitter FEED or even simpler take a look at President Trump in action just the last few days  ….

or how about today or right now as I am writing this week’s episode and keeping one eye at the news coming out of Washington right now tonight.

Just one more quote from The New York Times article …

“Trump raised concern last month when he slurred some words on national TV. When asked about it, White House press secretary Sarah Huckabee Sanders said questions about Trump’s health were “frankly, pretty ridiculous” and blamed his slurred speech on a dry throat, “nothing more than that.”

“More questions have been raised in the weeks since, given the tone of some of his tweets and the reported comments of some of the people who deal with him day to day. Some were recently published in a new book about his first year, which Sanders denounced as “complete fantasy” for its portrayal of Trump as undisciplined, child-like and in over his head.”

Welcome to the INSANE Asylum some still call The White House.

So what is my “cure” for Trump? MEDICAL marijuana maybe; maybe not.