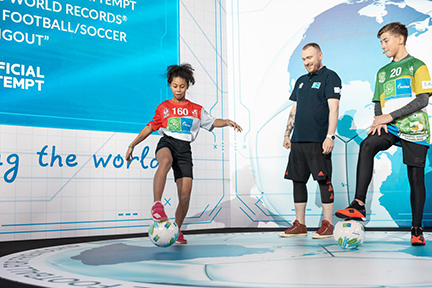 News Americas, NEW YORK, NY, Tues. April 27, 2021: The countdown has begun to another Football for Friendship eWorld Championship (eF4F), set for Istanbul, Turkey this May.

Some 211 countries and regions will be represented this time round at the Gazprom’s International Children’s Social Programme – taking place in a digital, multiplayer simulator format this year again, because of the pandemic.

Since April 19th, football academies all over the world have been invited to nominate girls and boys aged 12 to 14 as players. The draw that will put the kids into International Teams of Friendship will be in the middle of May. The Football for Friendship eWorld Championship (eF4F) will take place from May 27th to 29th.

International team matches can be organised on this platform in real time. The individual users, each of whom is a player on the team, come from different countries. The team consists of a goalkeeper, a defender, two midfield players and two attackers. There is also a trainer and some substitutes. A game runs for 2 halves of 3.5 minutes.

The International Children’s Social Programme Football for Friendship has been run by Gazprom since 2013. Over the previous eight seasons, the programme has brought together over 15,000 participants from 211 countries and regions and over 6,000,000 supporters.

Young Players and Young Journalists are the participants in the programme – boys and girls aged 12 including children with disabilities. Young Players represent different countries and cultures united in the mixed teams of the Football for Friendship World Championship. They show that nationality, gender, and physical abilities aren’t a barrier to becoming a team. Young Journalists cover the events of the programme in the International Children’s Press Center. All participants become Young Ambassadors of the programme and continue to share their Football for Friendship experience and promote universal human values: friendship, equality, fairness, health, peace, devotion, victory, traditions, and honour.

In 2020, Football for Friendship was held online. A special digital platform connected over 10,000 players of all ages. It has become the home for international children’s competitions and a playground where anyone can train, join in the international mixed teams and play their favourite game in the Football for Friendship format without leaving the comfort of their home.

Guess How Usain Bolt Is Involved In The Caribbean Day Of Giving?