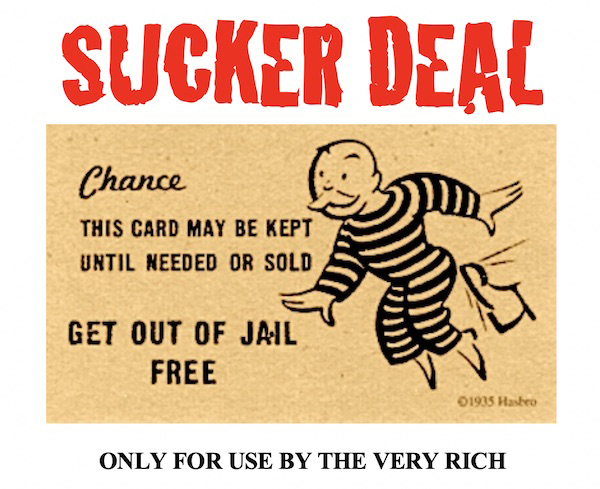 News Americas, NEW YORK, NY, Fri. Aug. 30, 2019: Sorry, you don’t qualify for a “get out of jail free” card …Unless some of my many readers are secretly richer than I know?

Certainly 99% of Americans do not qualify. Know who does?

The “Wonderful” Sackler Family. Billionaires all of them. Yes, that great American family the Sacklers. What do the Sacklers have in common with notorious dangerous murderous legendary drug dealer Joaquín Guzmán …

They are ALL major drug dealers. The difference is the Sacklers have caused even far more deaths and suffering than Joaquín Guzmán.

Here is the other difference this episode of Trump’s America features Guzman is locked in solitary confinement for the rest of his life in the super max prison that holds the most dangerous and notorious criminals but ..

The Wonderful Sacklers will NEVER see the inside of any prison not even the semi-luxurious minimum-security facilities for pampered prisoners, not even ever have to wear an ankle bracelet or report to a parole officer …

WHY????? You know why because “justice” is not blind at all. There is justice for most of us and so called “justice” for the rich and powerful who are in a position to BUY JUSTICE because they meet two conditions 1) they can afford to pay as much as they are asked by the government, and 2) they can claim the necessary Elite credentials. The Sacklers qualify for membership among the Elite who rule over American and the rest of us.

You can identify them by where they live, have elegant vacation homes, private jets and yachts, are seen at the most exclusive parties and openings. They make “generous” contributions to museums and charities. They are often very big contributors to either Democrat or Republican Parties and candidates and often both. Their fortunes are typically based on they or their family’s stake in a well know major highly profitable corporation.

They are most often in Forbes annual listing of Billionaires.

Are we discussing The Wonderful Sacklers here? YES WE ARE!

The most famous and notorious drug dealers in all of human history. They were all very rich from founding and owning a major drug company Purdu Pharma even before selling opioids but pushing dangerous addictive opioids over the last decade has made them all far, far richer BILLIONS $$ richer.

Their company with their full support selling opioids like candy resulting in thousands and then more thousands of deaths from their addiction, and suffering and pain beyond imagination more than any other drug kingpins in all of history including the aforementioned Joaquín Guzmán ….

That ladies and gentlemen, girls and boys is how justice does NOT work for the rest of us in America and likewise around the world.

It is time this outrage STOPPED ..

NO MORE GET OUT OF JAIL FREE cards for rich powerful Elites.

Right now today this criminal family is offering the government BILLIONS $$$ if necessary even give them the entire company in return for just one thing which of course you don’t find stated in any of the media stories praising The Wonderful Sacklers for their “generous” (sic) offer.

EXCEPT RIGHT HERE ….  Here is exactly what they demand as non-negotiable and will get in return from OUR government …

Absolute guarantee written into the agreement NO member of the Sackler Family will ever be criminally prosecuted for any reason having to do with opioids or Purdu Pharma by any government agency federal, state or local…

SURPRISE.. they will get that guarantee as other members of the Elites have before them so often like for the SUB-PRIME SUPER SCANDAL …

NOBODY no one at all went to jail for those mega-crimes. The Obama Administration did not put even one of these criminals in jail but rather gave their companies many BILLIONS to compensate them for their “losses.”

It happens all the time no matter how bad the corporate crime, the  perpetrators pay up better and PAY OFF the government as much as necessary and often very little and go on their very merry way ….

While at the same time we have the largest prison population of any nation on Earth prisons filled with those caught with marijuana or stealing food from a store and plenty of other non-violent offenses and also the innocent whose only “crime” is they cannot afford a good lawyer or even bail.

Our government confiscated BILLIONS $$$ from Joaquín Guzmán the drug money he “earned” then they prosecuted him as a dangerous drug lord.

The Wonderful Sacklers deserve no more or less they deserve JUSTICE.

No more “GET OUT OF JAIL FREE” cards for the very rich and powerful.

EQUAL justice for all .. no more SUCKER Deals for the rest of us.

Which Presidential candidates will offer us that guarantee?

Until it happens yes you can buy your own GET OUT OF JAIL FREE card but only if you get rich and powerful enough to “afford” (sic) one.

Bieber "under the weather", but expects to perform

White House says its immigration plan is a sidebar to congressional action – CNN...