Home Caribbean Barbados 10 Top Caribbean-Born Doctors In The U.S. You Should Know 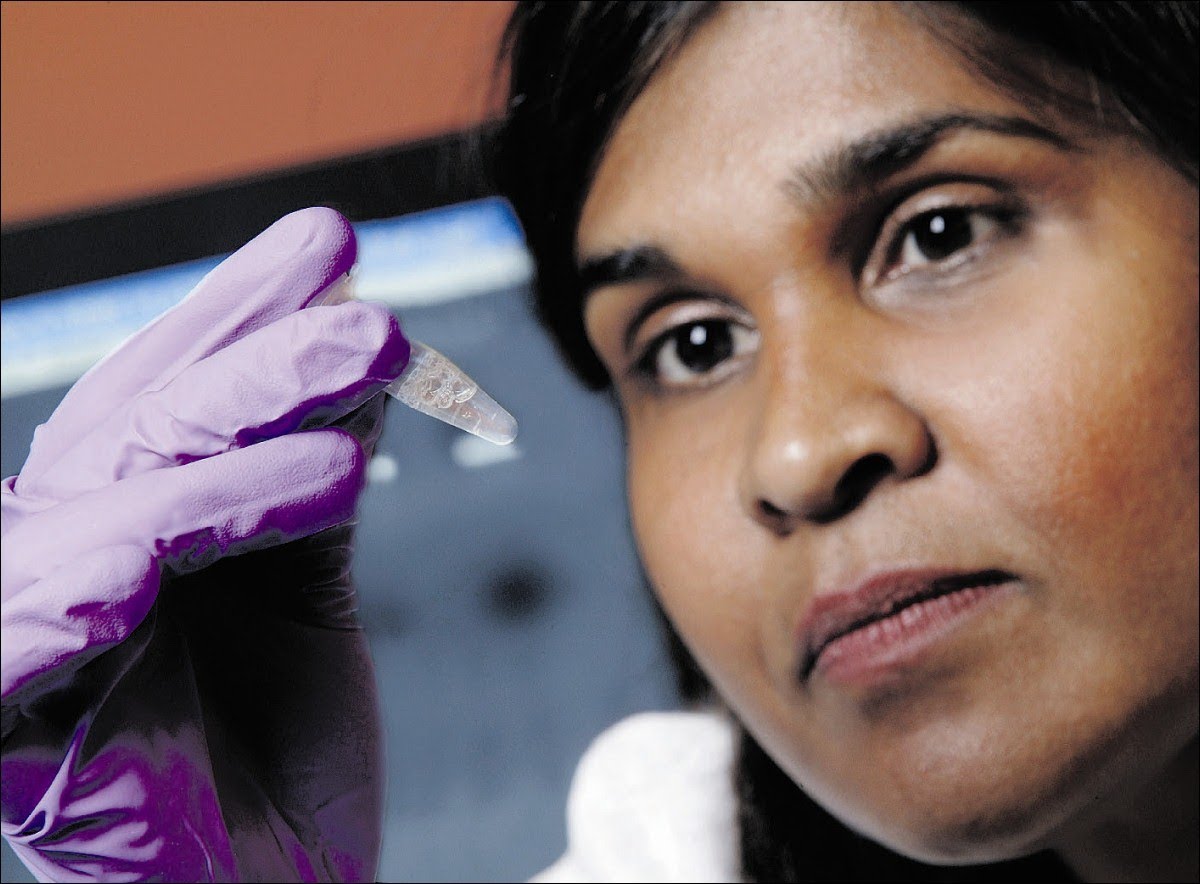 Dr. Deborah Persaud is a Guyana-born HIV Expert. In 2013, Dr. Persaud made the Time Magazine list of ‘Top 100’ Influential People in the world and was featured around the globe for her work in the first functional cure of HIV in an infant.

Persaud is a virologist and an infectious disease specialist whose other work has focused on strategies to prevent mother-to-child transmission in underdeveloped countries, where children have been hit the hardest by HIV.

Born in Barbados, Dr. Velma Scantlebury is the first black female transplant surgeon in America. She is currently the associate director of the Kidney Transplant Program at Christiana Care in Delaware. With more than 200 live donor kidney transplants under her career, she holds extensive research credit in African American kidney donation.

Dr. Scantelbury, who was once told her hands were too small to be a surgeon, now is curing many. She often sees minority patients in dialysis because they can’t afford the medications to keep their kidneys strong. She works with social workers to get government funding for her patients. One of her current and future endeavors is to increase the longevity of the transplant patient. The average survival time for a kidney transplant is 10 to 15 years for a living donor and 8 for a cadaver transplant.

She is associate chief of cardiology at Memorial Sloan Kettering Cancer Centre in New York and was born in Jamaica. Dr. Michelle Johnson is one of only doctors at Memorial Sloan Kettering Cancer Center who specializes in cardiovascular disease. She received her medical degree from Weill Cornell Medical College of Cornell University and has been in practice for 23 years. Dr. Johnson is also graduate of Kingston, Jamaica’s Immaculate Conception High School.

Trinidadian-born Dr. Farzanna S. Haffizulla is a nationally recognized physician in internal medicine who works in Broward County, Florida. She has an extensive background in molecular microbiology and expertise in new trends in disease prevention. Dr. Haffizulla has specialized knowledge of women’s health issues, diabetes, weight loss, hypertension and hyperlipidemia. She recently founded a Preventative Medicine Task Force through the American Medical Women’s Association (AMWA), in conjunction with the U.S. Surgeon General’s office, to research disease prevention globally. Dr. Haffizulla’s list of honors and accomplishments includes her induction as a direct fellow into the American College of Physicians.

Dr. Kathie-Ann P. Joseph was also born in Jamaica but grew up in Brooklyn, NY. She is the director of breast services at Bellevue Hospital. Dr. Joseph graduated from the Columbia University College of Physicians and Surgeons in 1995 specializing in general surgery. She is the first black woman to be appointed to the faculty of the Department of Surgery at New York-Presbyterian Hospital/Columbia University Medical Center (NYPH/Columbia). Dr. Joseph has made significant contributions to breast cancer research and treatment and has studied how race affects health. Crain’s New York Business weekly once named her one of its “40 Under 40” rising stars.

Born in the late 1960’s in Haiti, Dr. Patricia Nicholas is the Vice-President of the New York State Podiatric Medical Association and founder of the Kindest Heart Foundation which was founded after a volunteer stint in her homeland after the devastating earthquake of 2016. Dr. Nicholas has a private practice in Long Island, New York and Past President of the Caribbean American Medical and Scientific Association.

She migrated to the United States in 1982 and graduated from Erasmus Hall High School in Brooklyn, New York in 1984. She went on to receive a Bachelor’s of Science degree from St. Francis College in 1989 with minors in French and Philosophy. Dr. Nicholas further pursued a doctoral degree and graduated from the New York College of Podiatry Medicine in 1993 and completed her residency from Wyckoff Heights Medical Center.

She specializes in obstetrics/gynecology, and has over 40 years of experience in the field of medicine. Jamaican-born Dr. Millicent A. Comrie’s medical practice at 148 Pierrepont Street in Brooklyn NY sees hundreds of women per week, all seeking her warm care and special knowledge. Dr. Millicent Comrie grew up in Kingston, Jamaica and migrated to the United States to continue her tertiary studies at Morgan University in Baltimore, MD and Howard University in Washington, DC, graduating with honors from the latter. She attended SUNY Downstate Health Science Center of Brooklyn, where she obtained her medical degree in 1976, and later went to Columbia University School of Public Health, where she earned a Masters in Public Health, with particular focus on Maternal and Child Health. Dr. Comrie has been given the Master Teacher Award in Obstetrics and Gynecology by the SUNY Downstate Alumni Association. She is a specialist in Obstetrics and Gynecology at Long Island College Hospital (LICH) in Brooklyn (now under NYU). Dr. Comrie has dedicated her practice to the education, the diagnosis and the treatment of one of the most devastating health conditions facing the Black woman today – uterine fibroids. She is a pioneer in the compassionate care and surgical treatment of fibroids, developing techniques that allow women, particularly young women, to retain their uterus and not have to undergo a hysterectomy, thus preserving fertility.

Georgetown, Guyana-born Dr. Tanya Hinds is an Assistant Professor of Pediatrics at the George Washington University School of Medicine in Washington, DC and is certified by the American Academy of Pediatrics as a Child Abuse Pediatrician. She is also a practicing pediatrician, in Baltimore, Maryland and Washington, D.C.

Dr. Hinds migrated with her family to the US in the late 80’s. She attended Queen’s College in Guyana, before continuing her education at Howard University in Washington DC, where she received a Bachelor’s in 1994 and a Master’s degree in 1997, both in Nutritional Sciences. In 2001 she earned a Medical Degree (MD) from Howard University College of Medicine. This was followed by pediatric residency training which she completed in 2004 at SUNY Downstate Medical Centre in Brooklyn, New York.

Jamaican Dr. Carol Biggs is responsible for the strategic development of the comprehensive Cardiovascular Program at South Miami Hospital and is also an adjunct professor at Florida International University and the Stempel School of Public Health.

She has been at South Miami Hospital for 15 years and has risen through the ranks to now head up one of the most important services for the hospital and Baptist Health. Dr. Biggs has worked in several well known medical facilities such as Jackson Memorial Hospital and Cedars Medical Center. Dr. Biggs migrated to the United States at the age of ten with her family. She attained her Nursing Degree at Rutgers University in New Jersey and her MBA-HA from the University Of Miami. She received her Doctor of Health Sciences (DHSc) degree from Nova Southeastern University.

An experienced, Cornell University trained, Board Certified Dermatologist and Dermatologic Surgeon with her office located in Jupiter, Florida, Dr.  De Anne H. Collier was born in Jamaica. She performs a blend of general medical/surgical dermatology and cosmetic/aesthetic services. Her areas of interest include adult and pediatric dermatology, skin cancer detection and treatment, as well as cosmetic procedures including Botox, soft-tissue augmentation, chemical peels and laser surgery. Prior to relocating to Florida, Dr. Collier practiced with Orbuch, Brand and Associates in Manhattan and Long Island. During that time, she was also a Clinical Assistant Professor of Dermatology at New York Presbyterian Hospital/Cornell University Medical College. A diplomate of the American Board of Dermatology, Dr. Collier has performed research in her field and has been published in the Journal of the American Academy of Dermatology and the Journal of Cutaneous Pathology.  Dr. Collier completed her undergraduate premedical studies at Georgetown University earning a Bachelor of Science in Biology. She received her Medical Degree from Emory University School of Medicine in Atlanta, Georgia and performed an externship in Dermatology at Johns Hopkins Hospital in Baltimore, Maryland.