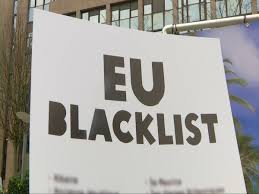 The EU recently added the U.S. Virgin Islands, Saint Kitts and Nevis and The Bahamas to its list of tax havens. They join Trinidad and Tobago which remains on the list.

Blacklisted jurisdictions could face reputational damage and stricter controls on their financial transactions with the EU, although no sanctions have been agreed by EU states yet.

Anguilla, The British Virgin Islands, Dominica and Antigua and Barbuda, meanwhile, were added to a so-called grey list of jurisdictions which do not respect EU anti-tax avoidance standards but have committed to change their practices. Those who are in the grey list could be moved to the blacklist if they do not honor their commitments.

However, three Caribbean countries were removed from the list.

St. Lucia, Barbados and Grenada were all removed on March 13th.  The three countries de-listed reportedly made “specific commitments” to adapt their tax rules and practices to EU standards, according to the EU.

All delisted countries have been moved to a “grey list,” which includes dozens of jurisdictions that are not in line with EU standards against tax avoidance, but have committed to change their rules and practices.