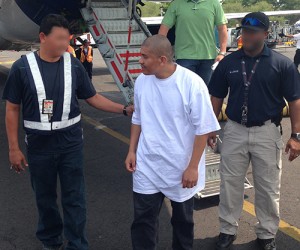 News Americas, WASHINGTON, D.C., Fri. May 2, 2014: Several South and Central Americans and Caribbean-born gang members and associates living in the United States has been arrested in a month.

The Homeland Security Investigations (HSI) unit has arrested more than 600 gang members and associates from 145 different gangs in 179 cities across the U.S. during a month-long operation called Project Southbound. The Project targeted gangs affiliated with the Sureños.

The Sureños, also known as Sur 13, is a transnational criminal street gang that originated in Southern California with hundreds of cliques around the United States.

Of the 638 gang members or associates arrested: 525 were charged with criminal offenses; 113 were arrested administratively for immigration violations; 414 had violent criminal histories, including seven individuals wanted for murder and five wanted for rape or sexual assault; and 256 were foreign nationals.

The Sureños and their affiliates pay tribute to the Mexican Mafia and the number “13” is their symbol signifying “M” in the alphabet for Mexican Mafia. Membership and cliques associated with the Sureños are expanding faster than any other national-level gang in the United States, according to the U.S. Department of Justice’s National Gang Intelligence Center’s 2011 National Gang Threat Assessment.

Sureños gang members are involved in a myriad of criminal activity, including murder, extortion, narcotics trafficking, human trafficking, prostitution and other crimes with a nexus to the border.

Through Project Southbound, which ran March 12 to April 13, HSI special agents worked with 150 federal, state and local law enforcement partners to apprehend individuals from various gangs affiliated with the Sureños. More than 73 percent of those arrested during this HSI National Gang Unit-led operation were members or associates of the Sureños.

In addition to the 638 gang members and associates, HSI agents also arrested – or assisted in the arrest of – 119 other individuals on federal and/or state criminal violations and administrative immigration violations, for a total of 757 arrests.

“Project Southbound is the largest-ever ICE operation targeting the Sureños gang,” said ICE Principal Deputy Assistant Secretary Winkowski. “This gang now has more than 30,000 members in the United States and its numbers are growing. Targeting transnational gangs like the Sureños is a top priority for ICE and we will continue to disrupt and dismantle the violence and criminal activities that they inflict upon our neighborhoods.”