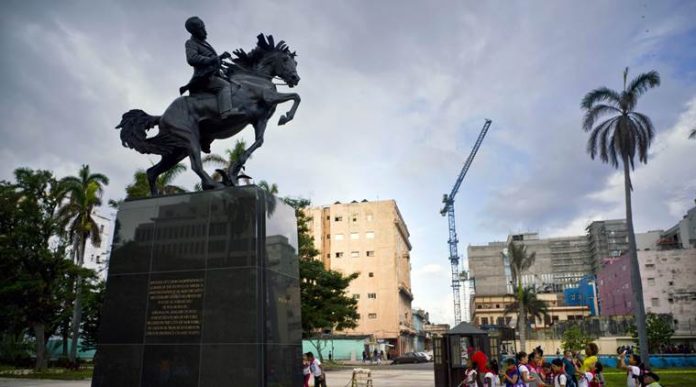 In the speech, Havana’s official historian, Eusebio Leal, said that this statue is an absolute copy in every detail of the original work by the American artist Anna Hyatt Huntington, which was finished in 1958.

The statue was made by the famous sculptor at the request of the then Cuban government as a gift to the United States. However, the sculpture was not inaugurated until 1965 because of strained relations between the two countries. It now stands close to statues of other Latin American heroes, Simon Bolivar and Jose de San Martin in the Central Park.

The statue was donated by the Bronx Museum of the Arts as a symbol of friendship between the two peoples.

Joseph Mizzi, chairman of the museum, said he felt honored by attending the ceremony on behalf of his colleagues.

“To the realization of this project, and to its significance as a gesture of the enduring friendship between the people of the U.S. and the people of Cuba,” said Mizzi.

The original sculpture is the only one known to date, depicting the figure of Marti at the time of his fall in action at the battle of Dos Rios on May 19, 1895 in eastern Cuba.

Based on a missing painting by the Cuban painter Esteban Valderrama, the bronze statue stands 5.67 meters tall, with a black marble pedestal.

Marti was born on January 28, 1853 and struggled from a young age to free Cuba from Spanish colonial rule, until his death in battle at the age of 42.

The 165th anniversary of his birth has been marked with several celebrations this week throughout the country. – Source: China Central Television (CCTV)

AIDS Related Deaths On The Decline In The Caribbean