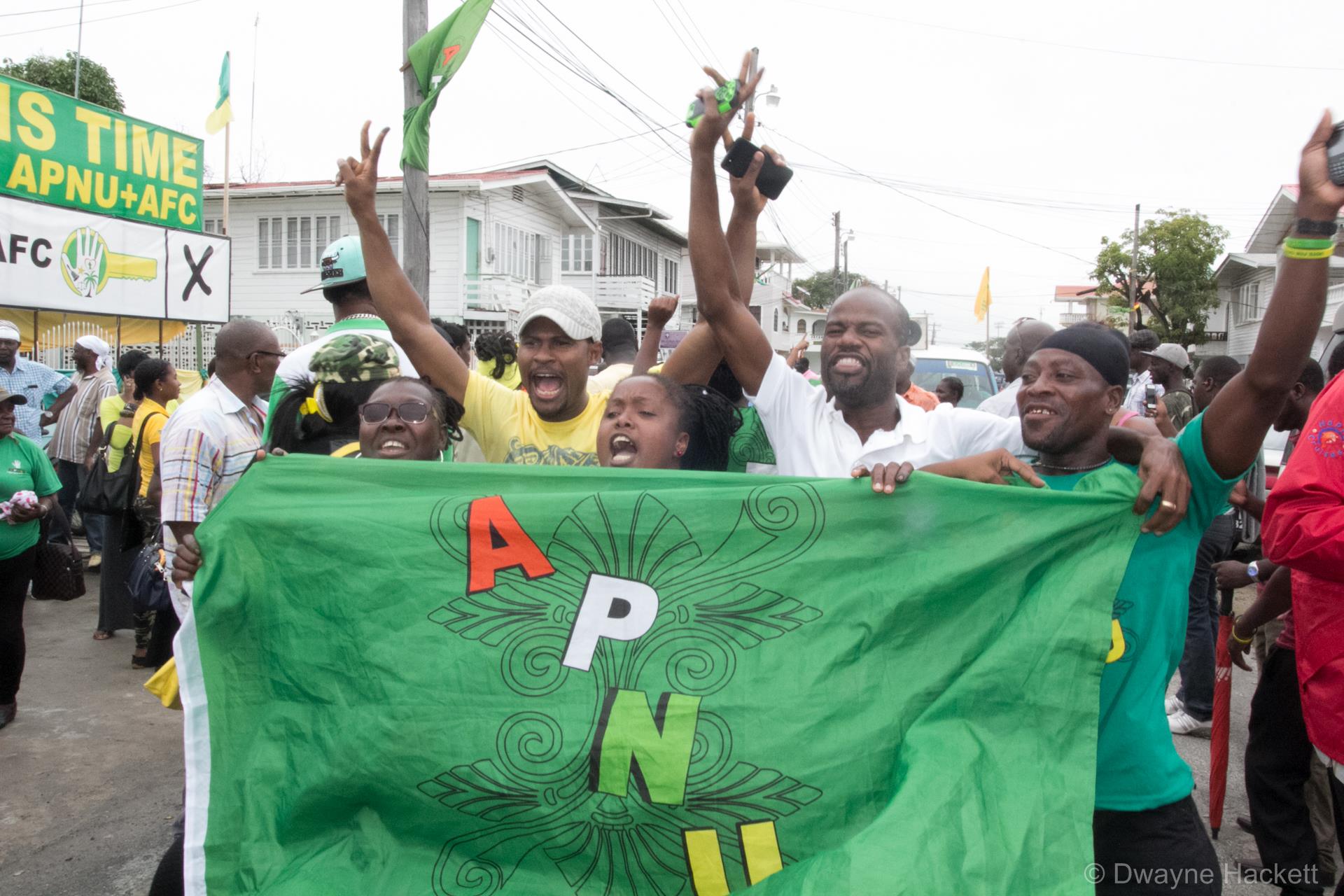 News Americas, GEORGETOWN, Guyana, NEW YORK, Fri. May 15, 2015: The days of waiting for the results of the May 11th election in Guyana is over and the country could see a new President sworn in as early as today.

The official declaration of the election results is expected to be made today, Friday May 15th but unofficial results released finally Thursday by the country’s Guyana Election Commission (GECOM) show voters in the South American nation choose the unity party, the APNU+AFC, over the old guard PPP/Civic party that had governed the country for 23 years.

This means that the APNU-AFC has won the Presidency and the Parliament but by a slim majority.

The news was met with jubilation by the main opposition supporters who had waited for days on the results.

Many filled the streets of Georgetown and other parts of the country, cheering, honking car horns, blowing whistles, dancing and even crying in celebration of the coalition’s victory.

President-elect, Brigadier David Granger, welcomed the win but said that celebration should be short lived since there is much work to be done.

“I am elated, I am happy for Guyana, we worked hard and we are convinced that now the evidence is clear that the majority of people are on our side, they understand our program, they share our vision and I feel it’s the best thing for Guyana. We are a six Party coalition and we are the closet Guyana has ever gotten to a government of national unity and that makes me very happy,” said Granger.

Chairman of the AFC and Attorney -at -Law, Nigel Hughes, called the results an “excellent” on the Caribbean-American forum bur expressed concern over the delay in the results.

“It’s unacceptable the way the nation was treated,” said Hughes on a live and simultaneous radio and television broadcast on www.hottcaribbean.com radio and www.tcnhd.com television . “The way in which the GECOM managed their press conferences shows a level of disregard for the population.”

However, head of the PPP/Civic and outgoing President, Donald Ramotar, said his party is not yet ready to accept the results, insisting there were a lot of inaccuracies in Monday’s elections and urging a recount of all the votes.

International observers have said the 2015 election in Guyana this week was free and fair.

Dismissing the PPP/Civic gripes, Caribbean Guyana Institute of Democracy’s Rickford Burke, said in New York that a “new day has dawned for Guyana.”

“The PPP has divided the Guyanese nation. It established itself as one of the most corrupt governments in the world, and governed as a ruthless ethnocracy. Their demise, therefore, orchestrated through the franchise and democratic will of the people, was inevitable,” Burke said. “We Guyanese will now move forward in harmony and national unity to develop our country together; leaving no race or ethnicity behind as we strive to fulfill our National Motto of ‘One People, One Nation, One Destiny.’”

LionWorks Secures Funding from PeopleFund to Accelerate Development of … – The Herald |...

8 ways Cuba has mastered the art of diplomacy to get what it wants...