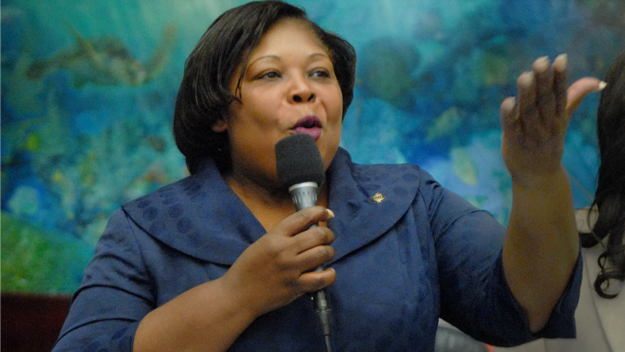 Campbell, who was elected to represent Florida’s District 38 eight years ago in the state legislature, lost to wealthy former prosecutor Jason Pizzo, who captured 54.2 percent of the vote in Senate District.

Campbell racked up a string of investigations and ethics complaints, including the time she filed a bill to ban red light cameras shortly after the family minivan was hit with five red light tickets during her tenure.

The diverse northeast Miami-Dade district includes the largest Haitian population in the country.

Pizzo held his watch party at the Midway bar in Little Haiti, and told the enthusiastic group to “look left, look right,” at the diversity of the crowd of supporters.

“I’m running a race against someone who’s using race and socio-economic status as a tool to divide,” he said. “We have rich and poor. We have a rainbow of everything.”

Campbell, 61, was born in Cap-Haïtien, a city in northern Haiti, where she attended the SOD Nursing School, receiving her bachelor’s degree in 1981.

Murdered Caribbean American Teen To Be Laid To Rest Today

Immigrants – Stick It To The Donald By Taking The 2020 Census

I’m an immigrant of extraordinary ability. No, hang on, we all are