Home Latest News Hollywood Is Hitting Theaters With A Film That Is All About A...

News Americas, NEW YORK, NY, Fri. Nov. 9, 2018: As America in 2018 is again dealing with rising racism and xenophobia, enabled in part by the rhetoric of its current President, Universal Pictures is set to release a film that deals with these issues as they occurred in the Jim Crow era and the amazing talent of one incredible Caribbean immigrant.

‘Green Book,’ which tells the story of the life and work of Jamaican immigrant Dr. Don Shirley, hits theaters on November 16th in roughly 20 cities across the U.S. before breaking wide on November 21st.

Directed by Peter Farrelly, best known for co-directing such cult comedy classics as ‘There’s Something About Mary,’ and ‘Dumb & Dumber,’ with his brother Bobby, the film is partly inspired by the life of jazz pianist-composer Dr. Shirley and stars Viggo Mortensen and Mahershala Ali.

It tells the story of Tony “Lip” Vallelonga (Mortensen), an Italian-American bouncer from the Bronx, hired to drive Dr. Shirley (Ali) on a concert tour from Manhattan to the Deep South.

Along the way, they rely on the “green book” to guide them to the few establishments that were then safe and accessible for blacks at the time.

Confronted with racism and danger, as well as unexpected humor, the two men are forced to set aside their differences to survive and thrive on the journey of a lifetime. 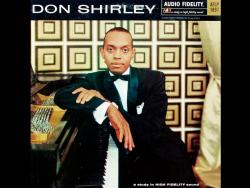 Donald Walbridge Shirley was born on January 29, 1927, in Kingston, Jamaica. His first teacher was his mother. He began playing piano at age of 2½ and made his first public performance at the age of 3. At the age of nine he was invited to study theory with Mittolovski at the Leningrad Conservatory of Music, and he later studied with organist Conrad Bernier and studied advanced composition with both Bernier and Dr. Thaddeus Jones at Catholic University of America in Washington D. C.

Shirley made his concert debut at the age of 18 with the Boston Pops June 25, 1945, with Dean Dixon as guest conductor playing the Tchaikovsky B-flat minor concerto. In 1946, his first major composition was performed by the London Philharmonic Orchestra.

In 1949, he received an invitation from the Haitian government to play at the Exposition International du Bi-Centenaire De Port-au-Prince followed by a request from Archbishop Le Goise and President Estime for a repeat performance the following week.

At Arthur Fiedler’s invitation he appeared with the Boston Pops in Chicago in June 1954. He performed the Tchaikovsky concerto in the fall of 1968 with the Detroit Symphony. He has appeared as soloist with the Detroit Symphony, the Chicago Symphony, the Cleveland Orchestra, the NBC Symphony, and the National Symphony Orchestra Washington to name only a few. Including his appearances with the trio, he averaged 95 concerts a year.

He wrote symphonies performed by the Philadelphia Orchestra and the New York Philharmonic, and composed four organ symphonies, numerous pieces for piano, two string quartets, and a piano concerto. Dr. Shirley also played as soloist with the orchestra at Milan’s La Scala opera house in a program dedicated to Gershwin’s music.

He held a Doctorate of Music, Doctorate of Psychology (University of Chicago, Phi Beta Kappa), and Doctorate in Liturgical Arts, spoke eight languages fluently, and was a talented painter as well.

He abandoned the piano as a career while quite young, and it was while in Chicago as a psychologist that Don “tripped” back into a musical career. He was given a grant to study the relationship, if any, between music and juvenile crime wave which had suddenly broken out in the early 1950s. Working in a small club there, he used his knowledge and skill to perform experiments in sound, whereby he proved that certain tonal combinations affected the audience’s reactions.

No one in the audience knew of his experiment, or that students had been planted among them to gauge their reactions. But Don Shirley, the pianist, became a sensation.

During the 1950s and 1960s, he cut 16 albums for Cadence Records. His single “Water Boy” reached #40 on the Billboard Hot 100 and stayed on the chart for 14 weeks. He then began to make appearances in New York, notably at “Basin Street East”, where Duke Ellington first heard him. Here started their warm friendship which was highlighted by Don’s performance in 1955 of the premiere of Duke’s Piano Concerto at Carnegie Hall with the NBC Symphony of the Air. An appearance on the Arthur Godfrey Show launched his career nationwide and he went on to do a tour, playing clubs in the South in 1962.

He composed 3 symphonies, two piano concerti, a cello concerto, three string quartets, a one-act opera, works for organ, piano and violin, a symphonic tone poem based on Finnegans Wake and a set of “Variations” on the legend of Orpheus in the Underworld.

At one point he stated: “It is only in his music, which Americans are able to admire because a protective sentimentality limits their understanding of it, that the Negro in America has been able to tell his story. It is a story which otherwise has yet to be told and which no American is prepared to hear. Americans who evade, so far as possible, all genuine experiences, have therefore no way of assessing the experiences of others and no way of establishing themselves in relation to any way of life which is not their own. Thus the idea of my music can be presented without fear of contradiction, since no American has the knowledge or authority to contest it and no Negro has the voice.”

“Doc Shirley didn’t need a savior,” Farrelly said recently according to Vanity Fair.  “He didn’t have to go down to the South. He could have stayed up north, he could have gone to Europe, but he wanted to prove people wrong about his race, and he wanted to show a side that they didn’t know about. Yes, Tony Lip got him out of some earthy problems, but Doc Shirley saved Tony Lip’s soul. He changed him. He made him a better human being.”

Ali took on the characteristics of a classically trained pianist, while Mortensen transformed himself both physically and mentally into an unpolished Italian-American with a huge appetite.

Ali also pointed out that the pianist did not need to embark on such a dangerous tour of segregated American South.

“He wasn’t in need financially,” he said in an interview with Deadline. “He could have gone to Europe and toured, or stayed up above the Mason-Dixon line and toured there and made money; he was doing fine. Him going down through the segregated South during this time was really a choice to put himself on the front line and expose the South and that community to a man that was educated, cultured and intelligent in a manner that went beyond the stereotypical point of view of a white Southerner at that time. He was there trying to push the boundaries by his sheer presence.”

Saudi Arabia dream against jittery Mexico, with one eye on Poland