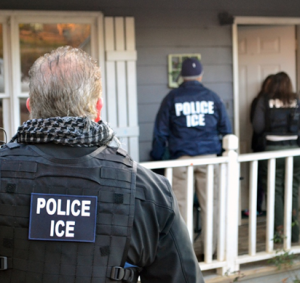 News Americas, NEW YORK, NY, Fri. June 16, 2017: A random check of the U.S. Immigration & Customs Enforcement site will show that Donald Trump’s ICE men and women are seemingly focused on rounding up those “bad hombres” or criminal immigrants who have committed major crimes like murders, rapes etc. – much like Trump and his White House minions like to claim.

For instance, on June 9, 2017, US ICE touted a headline that screamed: “ICE arrests over 50 in central California operation targeting criminal aliens, illegal re-entrants, and immigration fugitives.”

But contrast that with actual news reports from media organizations, attorneys, immigration organizations and immigrants themselves, and the story is an entirely different one.

During the same Central California sweep, sixteen of the 50 immigrants arrests targeted were those convicted of driving under the influence while six were arrested for domestic violence convictions, according to Sacramento Bee reports.

At a Nashville courthouse Faustino Rodriguez Hernandez was set to appear before a judge on a driving without a license charge, according to court records The Tennessean. But while he was at the courthouse, an ICE agent arrived and took Hernandez into custody, placing him federal prison where he will await  deportation proceedings.

On May 18th, California State Los Angeles student Claudia Rueda, a  22-year-old immigrant rights activist, stepped outside her aunt’s home to move her mother’s car for street cleaning, but never returned. Hours later her family learned that she had been surrounded by three unmarked cars carrying an estimated nine plainclothes Customs and Border Protection officers who whisked her off to a detention center 130 miles away, according to the LA Times. The reason? Though she is eligible for the Deferred Action for Childhood Arrivals program, which would protect her from deportation, her family could not afford the $500 application fee and so never renewed it.

Gilberto Velasquez, a 38-year-old house painter from El Salvador who has lived in the United States illegally since 2005 and has a U.S.-born child, recently received news that the government wanted to put his deportation case back on the court calendar because he was cited for driving without a license in Tennessee, where undocumented immigrants cannot get licenses, according to Reuters.

And Sally Joyner, an immigration attorney in Memphis, Tennessee said one of her Central American clients, who crossed the border with her children in 2013, could now be deported because she was charged with selling pumpkin seeds as an unauthorized street vendor.

ICE admits it has now expanded its list of potential deportees to include any immigrant who has used falsified identification. And the agency has also confirmed it is now filing motions with immigration courts to reopen cases where undocumented immigrants had “since been arrested for or convicted of a crime” regardless of how petty.

“This is a sea of change, said attorney David Leopold, former president of the American Immigration Lawyers Association told Reuters. “Before, if someone did something after the case was closed out that showed that person was a threat, and then it would be reopened. Now they are opening cases just because they want to deport people.”

This is the current reality of being an immigrant in Trump’s America; where ICE has been given the green light to target anyone with even the slightest infractions. If that is you, the best recourse would be to contact an attorney and get legal advice immediately before the ICE man cometh!

Georgia Waitress, 21, Who Body-Slammed Man After He Groped Her in Pizzeria Speaks Out