He argued that while congress tries to figure out a reasonable plan for comprehensive immigration reform, states like New York, with huge undocumented populations – 750,000 of the nation’s 11.7 million undocumented workers according to the Center for Migration Studies – should be able to implement a plan faster on the local and state level.

It is not the first time the idea has been floated. Former Governor, Eliot Spitzer actually had tried to implement these rules but faced the wrath of right wing conservatives who claimed it was state amnesty and a reward for “illegal aliens” for breaking the law.

De Blasio is right when he says we need to revisit the issue again; especially now, as the U.S. and bigger cities like Boston and New York battle with the reality of terror assaults. We need to know the background of everyone who lives in the city and state so our law enforcement officials can be better prepared. We cannot do that with tens of thousands in the shadows.

Applicants would need documentation proving their identities and showing they have lived in the state for at least 90 days. They also would have to pass driving tests and background checks verifying they have no felony convictions in the state.

As Connecticut’s Governor, Dan Malloy explained it: “This bill is first and foremost about public safety. It’s about knowing who is driving on our roads, and doing everything we can to make sure those drivers are safe and that they’re operating registered, insured vehicles.”

He’s absolutely right on the money, Now I think its New York’s turn to get this passed, especially since who knows when the Washington lawmakers are going to get their act together on comprehensive immigration reform?
I may get to letter 100 before anything happens; especially given Marco Rubio’s flip flopping on the bill he helped craft. But then again, what is new with the GOP! You may want to put in a call to your friends in New York to tell them to get cracking on this sooner rather than later. 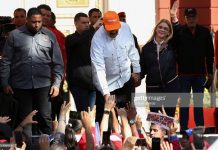 The Business of Tourism – Brand Trump And The Tourism Industry

Brian Stewart: The strategic importance of a ‘talkfest’ on drought – CBC.ca

The Great Chile Debate comes to an end as the Breck chile unseats the...