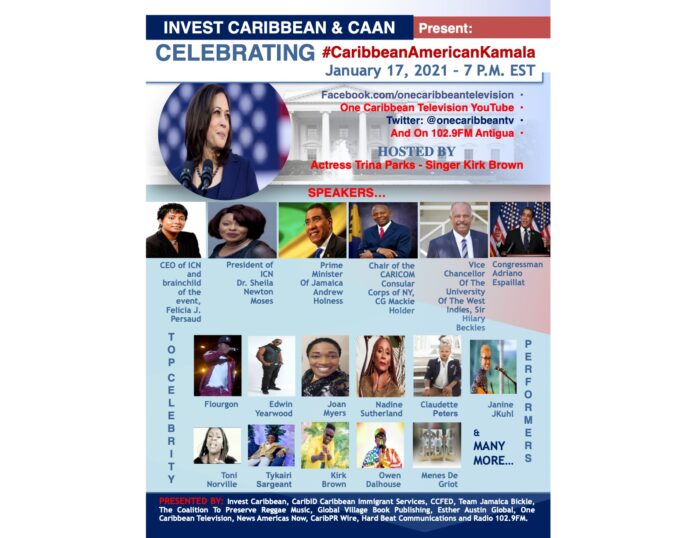 News Americas, NEW YORK, NY, Jan. 15, 2021: Caribbean artists across the region are bursting with pride over the election of the first black and female, Caribbean-American US vice-president – Kamala Harris.

They are set to celebrate this Sunday, January 17, 2021, from 7 p.m. EST, as Felicia J. Persaud, head of Invest Caribbean, the global private sector, investment agency of the Caribbean, and the Caribbean American Action Network, (CAAN), a collective of Caribbean American and Caribbean organizations, present the live, virtual, Caribbean inauguration party under the theme: “Celebrating #CaribbeanAmericanKamala.”

The star-studded Caribbean event will be live streamed by One Caribbean Television on its Facebook at facebook.com/onecaribbeantelevision; on ABS and CMC’s digital platforms and on Demerara Waves radio.

Caribbean American frontline workers, Guyanese-born Dr. Michelle Chester the corporate director Employee Health Services at Northwell Health, who administered the first COVID-19 vaccine in the US; and Jamaican-born nurse, Sandra Lindsay, who became one of the most famous nurses in the United States after receiving the first COVID-19 shot in the US, will deliver remarks on behalf of health care workers.

Mexico’s war on drugs: Arrests fail to drive down violence