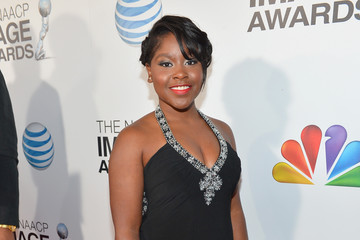 Shennell Edmonds was born in New Haven, Connecticut and has been acting since the age of 6; appearing in a national radio commercial at the tender age of 8. Her mother and her family hails from Goodwill and Loubiere in Dominica, and her dad’s family is from Bridgeport, CT.

Edmonds went on to score a major role in the ABC soap opera, One Life To Live, where she originated the role of Destiny Evans from February 27, 2009 until January 13, 2012.

She did not return to the role in 2013 after producers were unable to accommodate her school schedule. Edmonds has received several nominations, including in 2011 for the BET YoungStars Award and in 2012 for the NAACP Image Award for Outstanding Actress in a Daytime Drama Series.

Edmonds also appeared in the BET made for television movie, “Gun Hill,” a New York City cop drama produced by Reggie “Rock” Bythewood as well as in “Couples Only” and “Torchwood.”

She is also passionate about music and dance. In her spare time, she enjoys spending time with her family and friends. Edmonds currently lives, works and attends school in NYC and has said she loves all things Dominican, and by extension, all things with a Caribbean flavor.

She and her family are also big supporters of the various Dominican organizations in the tri-state area and her mission in life is to bring continued awareness the beautiful island of Dominica and its unique culture.

Roxanne Roxanne is a 2017 American drama film written and directed by Michael Larnell. It stars Chanté Adams, Mahershala Ali, Trinidad-roots Nia Long, Elvis Nolasco, Kevin Phillips and Edmonds. The film revolves around the life of rapper Roxanne Shanté, the most feared battle MC in early-’80s in NYC. It was screened in the U.S. Dramatic Competition section of the 2017 Sundance Film Festival.

Reggae At The Inauguration? Fuggetaboutit!

US VP Joe Biden in Mexico, Meeting With President

The State Of Gambling In Latin America