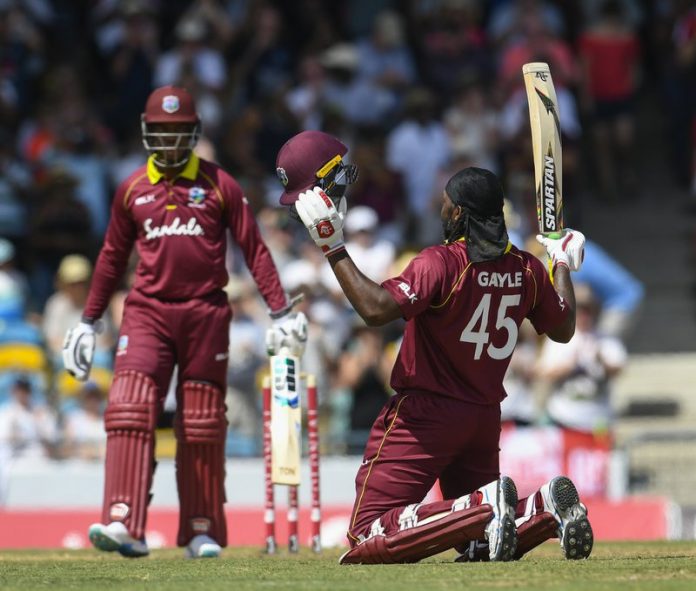 West Indies vice-captain Chris Gayle says he is eagerly looking forward to the upcoming ICC Cricket World Cup, to be played in England and Wales from May 30 to July 14.

The Jamaican top player says: “There is nothing to prove, the only thing now is to win the World Cup.”

This will be Gayle’s fifth appearance in the marquee event and said his aim is to win the top prize which would mark a high point in this outstanding career. Gayle started the year well in the ODI format with a scores of 135, 50, 162 and 77 against England during the home series in the West Indies. His heroics earned him the Man-of-the-Series award and helped the home side draw the series 2-2.

Overall, the 39-year-old has played 289 matches with 10,151 runs (average 38.16) including a West Indies record 25 centuries and 51 half centuries. His career-best score is 215 made against Zimbabwe at the Cricket World Cup in 2015. It is the highest score by a West Indian in this format.

The fixtures for the Windies World Cup matches are as follows:

Cuban long jumper Juan Miguel Echevarria will return to the scene of his headline-making leap of 8.83m from 12 months ago at the IAAF Diamond League in Stockholm on May 30th.

The world indoor champion, aged just 19 at the time, was denied a lifetime best in Stockholm last year as the wind was just marginally over the limit at 2.1m/s, but three weeks later he set a wind-legal PB of 8.68m to top the 2018 world list.

“It was a memorable day,” said Echevarria, who opened his 2019 outdoor campaign with a wind-assisted 8.92m. “The jump came in the sixth and final round so I was quite tired, but I remember that I hit the board well and my take off was really good. It will be such fun to compete at Bauhaus-galan again. The crowd certainly inspires you to great results.”

A litany of MLS players who were born in the Caribbean or have Caribbean roots there have been included in the preliminary 40-man rosters released by Concacaf for the 2019 Gold Cup.

The tournament opener at the Rose Bowl in Pasadena will see Canada and Martinique marking the start of Group A action followed by seven-time Gold Cup champions Mexico and Cuba.

The following day focus will switch to Costa Rica’s Estadio Nacional, the first-time the tournament will be played in Central America, with Haiti vs Bermuda and Costa Rica and Nicaragua. The roadshow then rolls into Kingston, Jamaica, with Curaçao vs El Salvador the Reggae Boyz taking on Honduras.

The final will be played July 7 at Chicago’s iconic Soldier Field.

The Caribbean MLS players includes in the roster are: 2011 world 100m champion Yohan Blake has been added to the list of elite athletes to compete at the 4th staging of the Adidas Racers Grand Prix – Jamaica, set for Saturday, June 8 at the National Stadium.

Is Guyana’s President Donald Ramotar Developing The Skills Of A Backfoot Player?