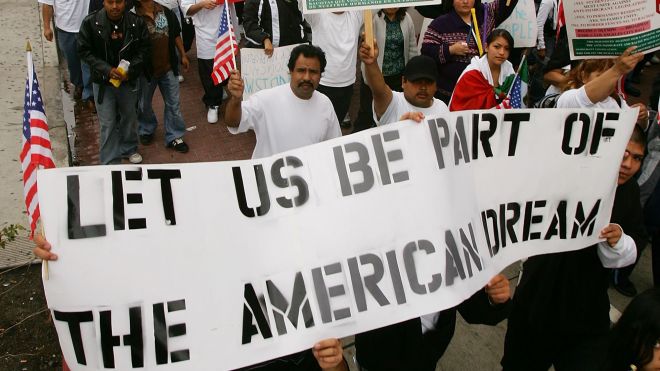 News Americas, NEW YORK, NY, Fri. Nov. 13, 2015: Let’s face it – we’ve all heard the song and dance from Democrats on immigration reform and how exactly they will ensure it. We hear it each time the Presidential election comes around.

Barack Obama before he was president sang it loudly to capture the immigrant vote. Then as President with a democratically controlled Congress and Senate in place, he did nothing except deport millions.

During his second term run, he dusted off those promises again – this time sprinkling in DACA (Deferred Action for Childhood Arrivals) to get the immigrant voters on his side once more. Yet again he failed to deliver, mainly because the Congress, which was now controlled by Republicans, decided to not agree with him on anything even after they lost the White House for a second time.

Now even DACA is up in the air.

Now no surprise – Hillary Clinton is making even more promises to immigrants on what she can do as President when it comes to immigration reform. She promises to go even bigger than President Obama – all in an attempt to win the immigrant votes as well.

But the fact is that despite the promises and plans and proposals from Democratic Presidential contenders, comprehensive immigration reform will not happen without the Congress.

And the GOP is refusing to budge on the issue even though their future is at stake.

New speaker Paul Ryan, who represents the city of Janesville in southern Wisconsin, with a population of just over 5 percent Hispanics, has now said he will not be advancing any immigration legislation until after the 2016 elections.

Why? According to Ryan, it’s all because he deems President Obama as “untrustworthy” when it comes to immigration policy. Translation – he and the GOP will do nothing to make Obama look good.

So they are waiting and hoping that one of their buddies – Donald Trump, Ben Carson or Marco Rubio pulls a rabbit out of the hat and wins.

We all have heard straight from the horse’s mouth what his immigration policy will be like.  And Rubio has already flip flopped on the issue so heaven help us all if either wins.

But immigrant voters have the power in their hands and must use it. A record 10 percent of the electorate in 2012 was Latino, up a percentage point from 2008, and the Asian-American share of the electorate rose to 3 percent, still small but historic. These numbers are significant when combined especially with the black voting bloc, many of whom are immigrants from the Caribbean and Africa.

Let’s look at some other numbers – between 1996 and 2012, the number of New American registered voters rose by 10.6 million—an increase of 143.1 percent—and the number of registered voters who are Latinos or Asians and Pacific Islanders (APIs)  increased by 9.8 million. Conversely, fewer and fewer voters are native-born whites.

This is worth repeating – Conversely, fewer and fewer voters are native-born whites!

New American voters must combine forces with African Americans to ensure that the GOP not only loses the White House again but also the Congress.

Come November 2016, it must be a complete annihilation of the GOP. Only then will be we able to move to the next step – holding the Democrats feet to the fire for comprehensive immigration reform. Let’s show the GOP the real power of black and brown America and prove its here to stay while ensuring the Democratic Party finally delivers on its promises.