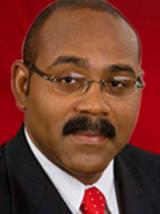 News Americas Now, ST JOHN’S, Antigua – Gaston Browne is the new prime minister of Antigua and Barbuda. The 47-year-old Antigua and Barbuda Labour Party (ABLP) wiped out the incumbent United Progressive Party (UPP) in yesterday’ general elections, winning 13 of the 17 seats in the parliament; according to preliminary results, and relegating prime minister Baldwin Spencer and his team to the opposition benches once more.

Observers hinted that the ABLP may even secure 15 of the 17 electoral districts, to hand the opposition an enviable and solid victory at the polls.

Thursday’s general elections in the OECS Caribbean nation were pregnant with upsets and intrigue that gave birth to a new government that now has a constitutional mandate to govern that country for the next five years.

Leader of the UPP and former Prime Minister Baldwin Spencer is still struggling to pull off a win against the ABLPs Londel Benjamin in the St. John’s rural west constituency.

The results sent social media website facebook in a frenzy. One poster commented about Spencer’s pending fate: “he’s holding on by a slim margin, ambulance is on point, I am shocked.” Another poster wrote: “Mr. Spencer you can now exhale.”

Spencer enjoyed the reigns of government for two straight terms from 2004 to 2014.

One of the biggest casualties of the night, the second most powerful man in the Baldwin Spencer cabinet and the UPP – Finance Minister Harold Lovell- lost his seat by 110 votes to the ABLPs Melford Nicholas in St George’s City East. The score: 794 to 684

Both Lovell and Cort were tipped to succeed Spencer at the helm of the party, so with both men out of the picture, the opposition party may find itself in some disarray.

What is clear is that Wimouth Daniel and Joanne Massiah retained their seats for the UPP.

“A new day has dawned; one that Antigua and Barbuda faces with confidence and resolve” prime minister elect Browne told a cheering audience post the election results.

Crime, poverty and a drowning economy were the key factors that led to the defeat of the UPP.

Apparently the country’s economy never recovered from the 2008 global financial meltdown and bad decisions saw a shrinking private sector and the government sometimes had difficulty in paying public servants salaries.

Browne who is a businessman and former banker is now tasked with restoring confidence in the economy and making the tourism sector, one of the country’s main source of income buoyant again. Brown will assume chairmanship of the Caribbean Community and Common Market (CARICOM) when the heads of government meet in Antigua in early July of this year.