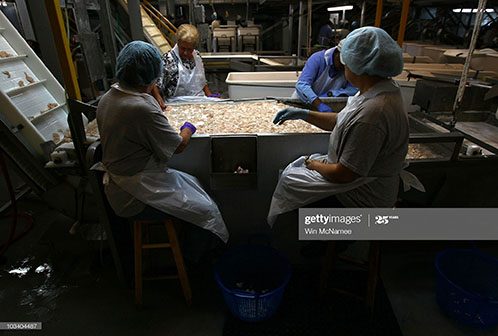 MEXICO CITY, Mexico, Weds. June 17, 2020 (Thomson Reuters Foundation) – Two Latin American women who worked in a U.S. seafood-processing plant said they were sacked in May for leaving company housing to seek hospital treatment as dozens of workers at the factory fell ill with coronavirus symptoms.

Maribel Hernandez and Reyna Isabel Alvarez from Mexico have filed complaints with two U.S. labor watchdogs against Louisiana-based Acadia Processors LLC, which they said told them and other sick workers to remain in employee housing without pay while ill.

“I told (Maribel), we’re going to die and they aren’t going to do anything,” Alvarez, a single mother who had worked four seasons for the company, told the Thomson Reuters Foundation.

The women declined to move to more isolated quarantine housing offered by the employer, packing their bags and heading to hospital for a coronavirus test and medical care. They both tested positive, as did other employees at the plant, they said.

Later, factory supervisors told them they were fired because they had packed their things before leaving, and that immigration authorities would be informed, according to the filings seen by the Thomson Reuters Foundation.

Representatives for Acadia Processors LLC did not respond to repeated requests for comment.

The women’s case highlights growing global concern that migrant workers are at increased risk of exploitation and infection during the COVID-19 pandemic as fear of reprisals stops many from speaking out or seeking medical help.

“Health-wise we’re better now but our morale?… it’s horrible to be like this without a job, without money,” said Alvarez, who along with Hernandez earned about $400-$500 per week at the plant and worked on a temporary H-2B visa.

Such visas are tied to a specific job, leaving the worker few options if they encounter abuse or exploitation.

Hernandez and Alvarez have filed charges against their former employer with the U.S. National Labor Relations Board (NLRB), as well as a whistleblower complaint with the Occupational Safety and Health Administration (OSHA).

The Mexico-based Center for Migrant Rights is representing the women.

The NLRB confirmed that it had received the filing last week and that the case was currently being investigated. The OSHA did not respond to a request for comment.

As governments struggle to meet the healthcare and economic needs of their own citizens, the plight of migrant laborers is being overlooked, said Jennifer Rosenbaum, U.S. Director for Washington D.C.-based nonprofit Global Labor Justice:

“Whether it’s the U.S. or India, major democracies are not asking themselves ‘what’s happening to migrant workers?'”

More than 1,100 Mexicans have died of coronavirus in the United States, according to Mexico’s government.

On Tuesday, Mexico said it had paused its migrant farm worker program in Canada after a coronavirus outbreak there killed two young workers.

Food-processing plants have been hotbeds for COVID-19 as employees work long hours in close quarters. Alvarez said the crawfish-peeling work she did meant standing in a row right next to other workers without masks.

Hernandez said she relied on the seasonal work in the United States to provide for her family back home, fearing that she could be blacklisted for her decision to speak out.

“We should make people aware not to discriminate against migrants, because we’re people, and we all come out of necessity,” said Hernandez, who is from the northeastern border state of Tamaulipas. “We put up with a lot.”