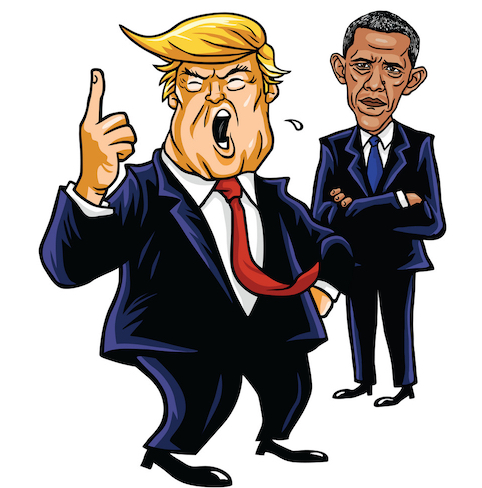 News Americas, NEW YORK, NY, Fri. June 1, 2018: I should write more than one Episode a week. So much good material.

But first a Shout Out to Trump for listening to me – ok others too – pardoning Jack Johnson. Now Trump’s getting carried away next Martha Stewart?

Back to current business this week’s episode and an explanation.

Once again, I had to trash this week’s episode in production, about two of America’s “best” families one of them the Trumps of course and the other even much, much worse I will keep them “undercover” until next week. I hope?

What happened? Our lead media partner The New York Times publishes an irresistible story Thursday about a new Kiss All book from an Obama Sycophant about Barack Obama which I just could not resist.

Thanks NYT for NOT warning me. A week’s work down the Drain.

I will fall every time for an episode story line that allows me to combine Obama’s America and Trump’s America in one grand synthesis and this one is PEREFECT. An example of Barack Obama “playing” Donald Trump.

Being every bit as Duplicitous and untruthful and worthlessly self-praising.

These two are so much alike in separate ways but it’s all One Con.

So let’s go right to The Times article not waste time.

I should call episodes like this Thursday Night ……  LIVE!

The Times story titled How Trump’s Election Shook Obama: ‘What if We Were Wrong?’

Call it Hilarious …. the opening line …. “Riding in a motorcade in Lima, Peru, shortly after the 2016 election, President Barack Obama was struggling to understand Donald J. Trump’s victory.”

Now the PUNCH line .. “What if we were wrong?” he asked aides riding with him in the armored Presidential limousine.”

WRONG President Obama WHAT do you mean … second PUNCH line …

“He had read a column asserting that liberals had forgotten how important identity was to people and had promoted an empty cosmopolitan globalism that made many feel left behind. “Maybe we pushed too far,” Mr. Obama said. “Maybe people just want to fall back into their tribe.”

Let me repeat that …. “Maybe we pushed too far”

And this … “Maybe people just want to fall back into their tribe.”

Does Obama write his own stuff. He has a future in COMEDY!

It gets much better. Back to the article …

“His aides reassured him that he still would have won had he been able to run for another term and that the next generation had more in common with him than with Mr. Trump. Mr. Obama, the first black man elected President, did not seem convinced. “Sometimes I wonder whether I was 10 or 20 years too early,” he said.”

Did you just hear that from Obama’s lips … “Sometimes I wonder whether I was 10 or 20 years too early,” he said.

10 or 20 years too early for what? You were a failure dude because you were a throw-back President from a bygone era who happened to be Black. You elected Donald Trump President because of your failure to deliver the CHANGE you promised us all. All we got was the Same Ole Same Ole.

And picture this President Obama riding in luxury in the most expensive limousine on Earth and his staff piled in the back seat with him consoling him please don’t feel sad President Obama soon you will be very, very rich.

“In the weeks after Mr. Trump’s election, Mr. Obama went through multiple emotional stages, according to a new book by his longtime adviser Benjamin J. Rhodes. At times, the departing President took the long view, at other points, he flashed anger. ”

“He called Mr. Trump a “cartoon” figure who cared more about his crowd size than any particular policy. And he expressed rare self-doubt, wondering whether he had misjudged his own influence on American history.”

Well HELLO Barack. You certainly did misjudge your influence.

So here it gets really, really funny … “He called Mr. Trump a “cartoon” figure” yes he is Barack but so are you which you apparently don’t appreciate.

If Donald Trump is a Cartoon Figure for “working” the American people and he is, well Planet Earth to Barack Obama so did you and so are you!

What exactly was your Great Achievements other than being Black?

And you were so looking forward to all those mega speaker fees once you left The White House to get very, very rich. As you are doing right now.

Those drug companies made BILLIONS from addictive pain killers while you were President and did NOTHING to stop them. And not even one of the corrupt drug company executives was prosecuted by you not one.

How about the sub-prime debacle the WORST financial crisis since the Great Depression how many of the financial industry miscreants went to jail as a result while you were President? NOT one NOT one. In fact, they made out like bandits which they were again by the time you left The White House.

But most of all and I can’t mention both of these too many times.

FIRST inequality in America grew greater than ever each of the EIGHT years you were President. The very rich got RICHER than they have ever been while the “lucky” middle class and poor stood still while it got worse for others.

SECOND absolutely no one NO ONE is more responsible for Donald Trump becoming President than you were. For two equally important reasons the “quality” (sic) of your Presidency and equally you more than anyone else fully backing the complete LOSER Hillary Clinton the only Democrat in America Trump could have beaten. Hillary YOUR anointed candidate!

What’s that but the economy was good “generally” while you were President well so is it even more with Trump as President. So if that is your Claim to Fame it is just as much Trump’s Claim to Fame.

So admit the Truth if Trump is a Clown Figure as you contend and agreed he certainly is WAKE up Barack Obama so were you!

Now back to The Times article …

“Set to be published next week by Random House, Mr. Rhodes’s memoir, “The World as It Is,” offers a peek into Mr. Obama’s tightly sealed inner sanctum from the perspective of one of the few people who saw him up close through all eight years of his Presidency. Few moments shook Mr. Obama more than the decision by voters to replace him.”

Give me and my readers a break. SHOOK you up Spin Master?

What should have SHOOK Obama more than anything is his role in electing Trump not this Fake News in this so called new book with its very misleading title, “The World As It Is.” Trump’s America is about the world as it is.

One FAILED Presidency led to another! And two Clown Figures.

Hopefully The Times or The Wall Street Journal or one of my other media partners will not throw me another irresistible story line next week at the last moment so I can do the episode I intended this week about two of America’s “finest” families. Ironically, on the other hand you could say this episode was about two of America’s “finest” families at least their two patriarchs.

NFL Stars For Turks And Caicos