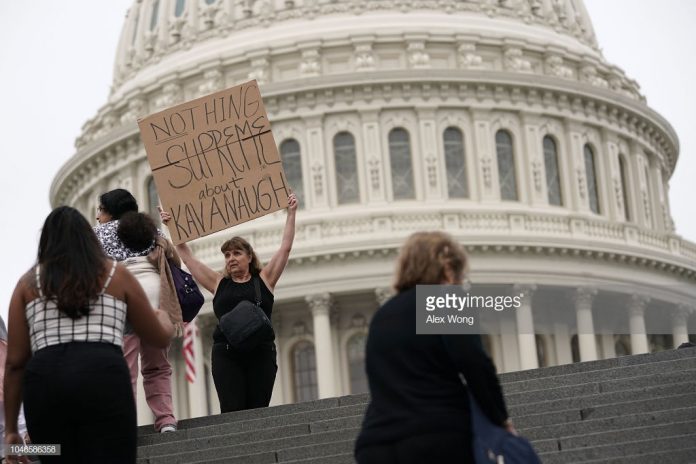 News Americas, MIAMI, FL, Fri. Oct. 19, 2018: For those who believe the confirmation of Justice Brett Kavanaugh is “water under the bridge” and we should all move on, get ready for the tsunami.

As Kavanaugh settled in for his first week on the Supreme Court last week, he showed his true colors and exactly whose side he was on in an immigration case that came before the bench regarding the jailing and deportation of immigrants for crimes committed years earlier.

At issue is a federal law that calls for mandatory detention and possible deportation of “criminal aliens,” including legal immigrants convicted of crimes ranging from violent felonies to simple drug possession.

The law says the Homeland Security secretary “shall take into custody any alien” with a criminal record that could lead to deportation “when the alien is released.”

The question really is Does the 1996 immigration law require that the government immediately transfer a criminal alien from criminal custody to immigration custody in order for the Government to subject the criminal alien to mandatory detention without a bond hearing?

The key word in the 1996 law being challenged by the American Civil Liberties Union, (ACLU), on behalf of people who entered the country illegally, tourists or students who overstayed their visas and lawful permanent residents, is the “when.”

The lead plaintiff in this case, Mony Preap, had come from Cambodia as a child and been a lawful resident since 1981. He was taken into custody for two convictions for possessing marijuana in 2006, but an immigration judge later canceled his deportation and he was released. He is now fighting deportation again.

The government has countered that narrowly construing the statute, as Preap proposes, would contradict Congress’s intent to reduce the growing threat to public safety posed by dangerous “criminal aliens” and their high risk of flight.

The outcome of this case has implications for the Government’s ability to detain immigrants without a bond hearing under the law following their release from criminal custody and affects the ease with which the Government can initiate deportation proceedings against immigrants.

The United States Court of Appeals for the Ninth Circuit, in San Francisco has already concluded that the law requires mandatory detention only if the federal authorities take immigrants into custody soon after they are released.

But Justice Kavanaugh has sided with the Trump administration and said the 1996 law put no time limits on the detentions it required.

“That raises a real question for me whether we should be superimposing a time limit into the statute when Congress, at least as I read it, did not itself do so,” he said. “What was really going through Congress’s mind in 1996 was harshness on this topic.”

Contrast that with Justice Neil Gorsuch, the other Trump appointed justice, said. He suggested that mandatory detentions of immigrants long after they completed their sentences could be problematic.

“Is there any limit on the government’s power?” Justice Gorsuch asked, which put the ball back into the court of the ACLU.

Justice Stephen G. Breyer also pressed the point, asking a lawyer for the federal government whether it could detain “a person 50 years later, who is on his death bed, after stealing some bus transfers” without a bail hearing “even though in this country a triple ax murderer is given a bail hearing.”

Justice Breyer said the solution was to allow immigrants detained long after release from criminal custody to have bail hearings. He said those would allow immigrants who were not dangerous and who posed no flight risk to return to their communities. “The baddies will be in jail,” he said, “and the ones who are no risk won’t be.”

This is where it gets petrifying for all immigrants in future similar situations like Preap. If Kavanaugh stays on the partisan side of the government and tilts the scales of justice in their favor, then this case means that not only can ICE show up at an immigrant’s door, arrest and detain them, but it could also mean they don’t get a bond hearing and are subject on ongoing mandatory detention and for how long?

Every immigrant should be afraid – be very afraid!