News Americas, MIAMI, FL, Fri. April 5, 2019: On Saturday, March 30th, the US State Department announced the Trump administration was cutting off aid to what is referred to as the “Northern Triangle,” or the countries of El Salvador, Guatemala and Honduras.

Whoever wrote the news scroll obviously meant “three Central American countries.” But instead the lack of simple geography and the stereotype of all-brown immigrants must be from Mexico, became painfully obvious to the world.

As Adam Serwer, a staff writer for The Atlantic, tweeted: “This is less an error than an expression of Fox News’ underlying sentiment towards most Latinos.”

The post of course quickly went viral and Fox, a major news organization with some 2.4 million viewers in large swaths of the President’s “base,” many of whom take Fox’s reports as seriously as the Gospel of Matthew, Mark, Luke or John, was forced to apologize.

How did this get past an editor or was no editor looking? Or worst yet, did the editor too fail geography or like many in the President’s base, believe all Latin American and Central American nations are simply Mexico because they all look alike?

It is laughable but it also reflects a bigger problem that is affecting America and epitomizes why Donald Trump maintains his hold and popularity with his so-called base, despite his own ignorance and at best basic views, on issues and policies of global importance.

It is what I call the ‘dumbing of America.’ And the data reflects it.

According to the US’ own data, 2,640,444 adults in the country are illiterate. ProLiteracy reports indicate that more than 30 million adults in the United States cannot read, write, or do basic math above a third-grade level while the Pew Research Center indicates that only 31.6 of native-born Americans aged 25 and older had a bachelor’s degree or higher, compared with 30 percent of foreign-born immigrants.

Further, surveys have found that the US ranks lower than Cuba, Canada, the UK and many Caribbean nations on the global literacy scale while many young college-educated Americans can’t pass a test on global affairs.

All this as the State Department reports that there are only just over 113,000 valid passports in circulation, which means 36 percent of Americans own a valid passport and therefore 64 percent do not. This means that a healthy majority of the population has never left the United States and have no exposure to a culture outside of their country.

As Mark Twain posited back in 1890: “Travel is fatal to prejudice, bigotry, and narrow-mindedness, and many of our people need it sorely on these accounts. Broad, wholesome, charitable views of men and things cannot be acquired by vegetating in one little corner of the earth all one’s lifetime.”

Is it any wonder then that the mistake of Fox News occurred or that the ill-informed views on immigrants, immigration and foreign countries by the President’s base of largely white, non-college-educated White men over 50 persist?

These same swaths of viewers served by this news channel are big believers in the President’s anti-immigration message. They are the ones who have bought completely into his “build the wall” plan: his claim that immigrants are invading the country, taking away jobs and killing innocent Americans and who happily throw around ignorant terms like “illegal alien,” “get in line,” and “amnesty”  without truly understanding the immigration process or laws and its impact on real lives.

The Fox News “chyron error,” as co-host Jedediah Bila, posted and then deleted is more than that. It reflects the dumbing of America that has helped elect Donald Trump and continues to keep xenophobia, prejudice, bigotry and narrow-mindedness alive in 2019. 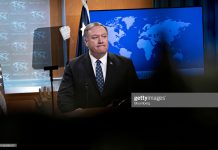 Lemaire to guest design for Uniqlo

The Lede: Malala Yousafzai, at U.N., Calls on World Leaders to Provide Education to...