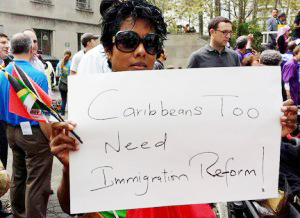 News Americas, FORT LAUDERDALE, FL, Fri. Aug. 2, 2019: The year was 1997. I was a new immigrant to the United States, having arrived from Guyana to Queens, New York in September 1996. Armed with a bachelor’s degree in mass communications from the University of Guyana, I decided to continue my pursuit of journalism which I had begun in my homeland.

After a short stint at the Caribbean Times newspaper in Brooklyn, NY, I was hired by the Queens Chronicle newspaper, a weekly, Jewish-owned newspaper located in Woodhaven, Queens, as an assistant news editor. In that capacity, I was responsible for their Caribbean American newspaper and its content, and later, for the content of the weekly Eastern Queens edition of the Queens Chronicle.

Each day, I would take the 7 train from my aunt’s apartment in Jackson Heights to Roosevelt Avenue and then transfer to the G train, which I would then take to the Queen’s Boulevard stop. From there, I would walk along Woodhaven Boulevard to the paper’s office in Rego Park.

I would repeat this trip in the afternoon, walking back from the office to Queen’s Boulevard and the G train. It was on one such afternoon in the Spring of 1997 that I would for the first time in my life come face to face with the ugly monster of racism.

I remember it being Spring because I was wearing a coat and there was a chill in the air. As I waited at the traffic light across from the newspaper’s office to get to the left side of the road and begin my brief trek to the train station, a black four runner, aka pick-up truck, driven by a white man with another riding in the passenger seat, slowed and then stopped at the light as it turned red. As I got was getting ready to step into the crosswalk to begin walking across the road, the white man driving shotgun rolled down his window and yelled at me without provocation: “Black b—ch, why don’t you go back where you come from.”

I froze mid-stride but looked up. His face was red and distorted to the point where he looked ugly. Hatred burnt from his eyes. They seemed icy blue, but I can’t be sure. I only know the hate seemed to make them pop out bigger.

I felt like I was shot. Fear and anger shot through me and I stepped back on to the pavement and away from the crosswalk confused, stricken. I felt hot tears spring to my eyes then, but I blinked them back. Pride kicked in and I stared at him, head held high. We locked gazes, neither one of us looking away until the light changed, and they drove off.

Fear kicked in then and I felt myself trembling like a leaf. It felt like someone had poured cold water on me on a Spring Day. Thoughts of what if they had a gun and had shot me filled my head. Somehow, I managed to find the strength to cross the road as the light turned red again.

Slowly I made my way to the train station that way, tears streaming down my face as thoughts of: ‘Why Did I Come Here?’ filled my head.

Sadly, it was to become just the first of my many experiences of racism in Good Ole’ America.

Some were subtle, others blunt; but none as hurt as much as that first cut on Woodhaven Boulevard.

Perhaps after that day I grew a tougher skin or my fighting, snarly spirt was awakened. America does that to you; or perhaps I had taken my boss at the Queens Chronicle’s advise to heart as he often said to me: “Kid this is America. You have to kick a–.”

Still after 22 years, I thought that ‘first cut’ racism was dead and buried in my consciousness. But sadly, on July 14, 2019, it was resurrected by the President of the United States and his “go back” where you come from tweet to three American-born Congresswomen and one naturalized U.S. citizen congresswoman, nonetheless.

And the scabs were ripped off all over again for this Caribbean-born immigrant turned naturalized U.S. citizen and I am back on Woodhaven Boulevard all over again, feeling the pangs of fear and hurt and anger and rage and wondering all over again: “Why Did I Come Here?”